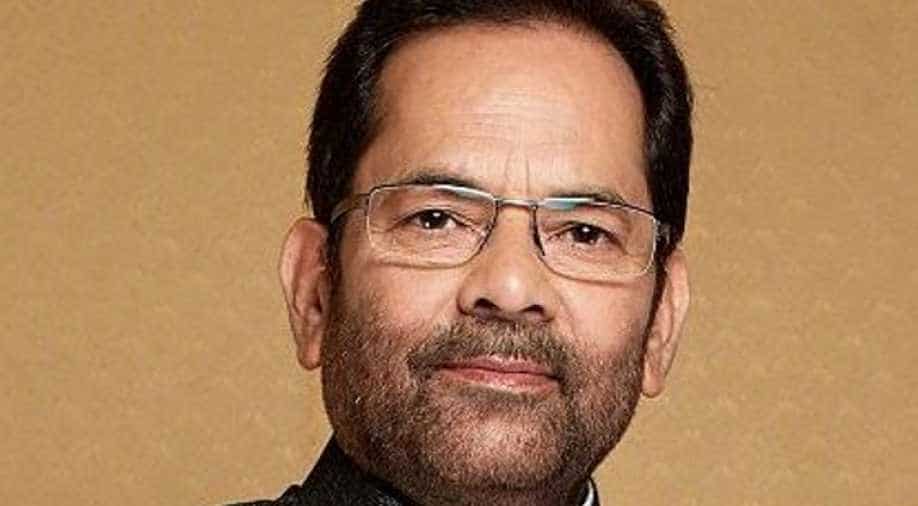 Speaking about the Sunni Waqf Board's decision of not filing a review petition, Naqvi added, 'It is good that they have decided not to go for a review'.

BJP leader Mukhtar Abbas Naqvi on Sunday said that the patience and peace maintained by the people in the country after the Ayodhya verdict revealed the strength of brotherhood in the nation.

"The patience and peace showed by the people after Ayodhya verdict shows that there is tolerance, harmony and brotherhood in the country and no one can break it. Everyone has welcomed this verdict and a very old case has been settled now," Naqvi told ANI.

He also said that there was no need to worry about All India Majlis-e-Ittehadul Muslimeen (AIMIM) leader Asaduddin Owaisi's statements expressing dissatisfaction on the Supreme Court verdict.

"Some people have the habit of speaking differently on any topic. Isolated voices like Asaduddin Owaisi should not be taken as the basis for judgment. 130 crore including Hindus, Muslims, Sikhs and others have welcomed the verdict," Naqvi said.

Earlier on Saturday, Owaisi had said that he was not satisfied with the apex court verdict and said the "Supreme Court is indeed supreme but not infallible".

Speaking to media persons, Owaisi said, "I am not satisfied with the verdict. The Supreme Court is indeed supreme but not infallible. We have full faith in the Constitution. We were fighting for our legal rights. We do not need five-acre land as a donation."

Owaisi said that he concurred with the All India Muslim Personal Law Board (AIMPLB) that they were not satisfied with the verdict.

Speaking about the Sunni Waqf Board's decision of not filing a review petition, Naqvi added, "It is good that they have decided not to go for a review of the Supreme Court decision as it was a unanimous verdict by the bench."

A five-judge constitution bench presided by Chief Justice Gogoi and comprising Justices SA Bobde, DY Chandrachud, Ashok Bhushan and S Abdul Nazeer passed the order on a batch of petitions against an order of the Allahabad High Court which trifurcated the site among the parties -- Ramlalla Virajman, Sunni Central Waqf Board and Nirmohi Akhara.

A decades-long legal dispute was fought by right-wing party Hindu Mahasabha, a sect of Hindu monks Nirmohi Akhara and Sunni Waqf Board over 2.77 acres of land in Ayodhya.