Opinion: Year 2017 saw the rise of the middle-class in Bollywood 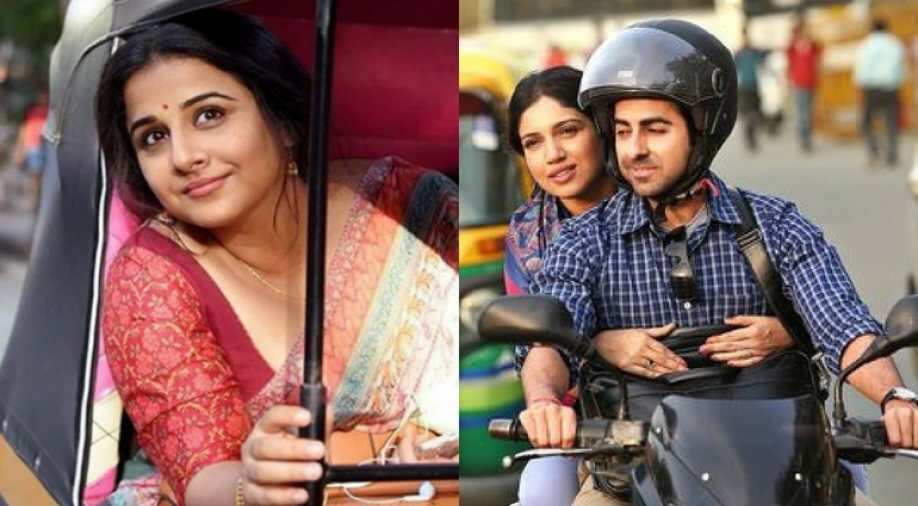 Stills from Tumhari Sulu and Shubh Mangal Saavdhan Photograph:( Others )

2017 will go down in history as the year when audiences finally accepted middle-of-the-road films and gave star-driven masala films a miss. Sure there were magnum opuses like Baahubali 2 and Tiger Zinda Hai that raked in the moolah but overall, the year saw films with solid stories making their place in audience's hearts.

The year made way for stories that were firmly rooted in the India and Indian society. It was the year when audiences turned their back to outlandish sets and foreign locales and lapped up stories that were set in Delhi's middle-class DDA flats or humble aboard in Vashi, Mumbai or for that matter in the bylanes of Bareilly. The films were on myriad topics- from a housewife finally finding her calling in life to a couple dealing with erectile dysfunction right before their wedding, Bollywood collectively woke up to the real world and dealt with real issues. And while the stories could have been different in each of these films, all of them had strong middle-class sensibilities at its core.

From RS Prasanna’s Shubh Mangal Saavdhan to Ashwiny Iyer Tiwari Bareilly Ki Barfi to Qarib Qarib Singlle to even Tumhari Sulu- all stories were about people who you would probably come across in your day to day life.

There was a time when Karan Johars and Aditya Chopras of the world showcased an India that looked almost like a fairytale. Old English castles became the Raichand house in Kabhi Khushi Kabhi Gham, or a boarding school in Mohabbatien. Heroes would arrive in choppers and heroines would only wear designer labels throughout the film. But things changed this year. The palatial house was replaced by humble flats in congested parts of the city, multi-crore businesses got replaced by regular jobs and the heroine even got a profession.

In one of the most important scenes of Shubh Mangal Saavdhan, Mohit and Sugandha take their relationship to the next level and try to get intimate as they find themselves home alone. But the couple is interrupted by the most inane things- first the loud music from the floor above theirs(because DDA flats and their poor construction), then Mohit gets uncomfortable looking at the mounted photos of dead relatives peering at them and then eventually he realises he can’t get it up. Such problems would be alien to Rahul and Tina in Kuch Kuch Hota Hai.

In Tumhari Sulu, Sulu while fanning herself with her saree during a family outing asks her husband to switch on the car ac at least three times, while husband who is trying to save fuel, meekly says ‘the pickup gets affected’. It's a phrase that probably you have heard your father say at some point in time while driving but perhaps is unknown to Karan Johar and his cinematic sensibilities.

For decades cinema in India has been aspirational. Grand sets, big business families, with the lead protagonists never really having a proper profession- cinema served as an escape route to one’s daily routine. They projected a make-believe world which was mostly far from reality. But over the last few years, filmmakers have consciously tried to project a world which is closer home. Of course, there are ample films still made which are typically masala potboilers and have larger than life hero as the main protagonist but a lot of filmmakers have over the years tried to push the envelope and talk about real problems.

Be it a poignant film on an election in a Naxal ridden area in Newton or a nearly 40-year-old widow finding love again in the most unexpected situation in Qarib Qarib Singlle, films are now more about us than about fictional characters. In Ashwini Iyer Tiwari's’ sharp Bareilly Ki Barfi, the heroine is a gutsy, feisty, independent girl. While her father is very proud of her, her mother is worried about finding a good groom for her and welcomes almost all suitable men to their house in an attempt to know their marital status. Her desperation is all too familiar to a lot of single girls who have faced similar pressure from parents about marriage.

In Milind Dhaimade’s Tu Hai Mera Sunday, among the gamut of characters, one character that stood out the most was Gujarati businessman Jayesh, who treats his Sunday football as a perfect escape from his large, loud joint family. And when the football stops, Jayesh takes refuge at his office to catch up on some sleep every Sunday in an attempt to escape from his responsibilities.

A lot of these films also were made for the urban audience and gave an insight to how India and its urban population has evolved over the years. While the modernity and practically has come in with time, the people are still firmly rooted in Indian culture. So a housewife can take up a job as a late night radio jockey at the local radio channel in Tumhari Sulu but will be quick to leave it like a typical Indian mother when her son needs her. Or in Qarib Qarib Singlle, the 40 something couple may take a trip to the hills together to know each other more, but would prefer living in separate rooms in the hotel.

They say cinema always reflects the society we live in. In the 50’s the films projected the new India and its problems. In 70’s, the political turmoil in the country created the angst-ridden hero in Salim-Javed stories. Post-liberalisation saw the arrival of international brands in India in the 1990s, where Karan Johar introduced the country to DKNY, Gucci, and Prada through his films making way for larger-than-life stories and aspirational characters.