Opinion: Did rebel SC judges want to save democracy or be heroes? 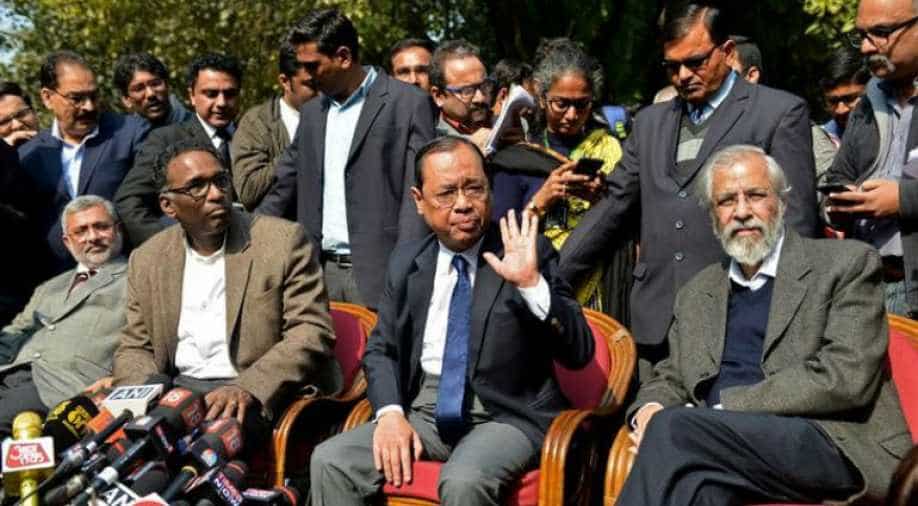 The Four Supreme Court Judges versus Chief Justice of India case has so many strands and multiple knots that it is difficult to identify the principal thread. Fresh developments over the last two days have made the task more onerous. It is possible that the crisis will blow over — as most crises do if they are addressed across the table with honest intent — but the stench generated will linger for a while. Meanwhile, it is amusing that the players who did the most to bring the issue into the public domain and create a public tamasha are now claiming it to be the judiciary’s internal matter, best resolved within closed doors and without outside interference.

There is already much written on the trigger for the Friday rebellion of four senior-most judges of the apex court. The Justices took the unprecedented step of addressing the media to say that “the administration of the Supreme Court is not in order” and that “many things which are less than desirable have happened in the last few months”. They stressed that they were compelled to bring the matter before the public because the Chief Justice of India had refused to act on a letter they had written to him, which laid down their grievances over the administrative functioning of the apex court, especially the allocation of cases to judges through the roster system.

One argument can be that the four judges’ decision to wash dirty linen in public was a courageous act to clean up the system. Indeed, one of them, Justice J Chelamaeswar, sought to take the moral high ground by stating, “We do not want people to say 20 years later that all four senior-most judges sold their souls…” On the lines of this contention, it can be further argued that one among the group, Justice Ranjan Gogoi, could have imperiled his prospects of succeeding incumbent Chief Justice of India Dipak Misra to the post, given that he is the senior-most in line to be around when the CJI debits office.

The counter-argument is that no amount of justification can set right the wrong done by judges of the Supreme Court going public against the Chief Justice of India. Since they admit it to be the judiciary’s internal matter, the issue ought to have been settled internally. If they were dissatisfied with the Chief Justice’s response, or lack of it, they could have tried other avenues, such as requesting respectable names from the legal fraternity, to intervene. Damning the judiciary’s image through a publicity stunt for self-glorification is simply not done.

There has been at least one undesirable fallout that the four judges cannot deny: It has allowed politicians to wade into the controversy and make the issue sectarian. Communist Party of India leader D Raja met Justice Chelameswar soon after the latter’s Press meet; Congress president Rahul Gandhi addressed a Press conference hours after the four judges did; the Shiv Sena praised the rebel judges; dissident Bharatiya Janata Party leader Yashwant Sinha advised BJP leaders to take a leaf out of the judges’ book and ‘speak out’, ostensibly against the party leadership — a clarion call which is certain to go unheeded.

The other undesirability has been that the controversy has split the legal fraternity as well — the Bar Council of India and the Supreme Court Bar Association took somewhat different positions, though both agreed on the need for a quick internal resolution, whereas retired judges have also taken sides. Brazen partisanship has been displayed.

At the Press conference on Friday, one of the judges admitted that the issue of allotting a Bench to hear the case of the death of CBI judge BH Loya, had been a flashpoint. He hinted the four dissenting judges had been in favour of giving the case to a Bench with a composition which was different from the one then decided by the Chief Justice of India. Apparently, the CJI had not relented, on the ground that he was the master of the roster and that it had been past practice for the Chief Justice to have a final say on the allotment of cases.

The Loya issue is signifiant because it became the focal one for opposition parties to condemn the Modi Government. Judge Loya had been hearing a murder case in which BJP president Amit Shah had been dragged, when he died of cardiac arrest. Last year, the judge’s family members raised doubts over his death and demanded a probe. Tehseen Poonawala, an activist with leanings towards the Congress, filed a petition in the apex court. Over the last two days, two developments took place which have muddied the waters.

The first is Poonawala’s disclosures. He said that, as a petitioner, he had no issues with the Bench that had been allotted the case. He added that his lawyer had tried to persuade him to withdraw the case on the ground that a similar matter pending before the High Court in Maharashtra would get delayed in case he went ahead with his plea in the apex court. But the real reason, which Poonawala further said, was that his lawyer believed the judge to whom the matter had been given for hearing in the Supreme Court, was a “henchman” of the Chief Justice of India. Poonawala alleged that his lawyer had sought to “bully” him.

The second development involved family members of the deceased judge, Loya. His son addressed the media and said he no longer harboured suspicions and that medical records of his father’s death were clear enough. He admitted to having entertained doubts in the immediate aftermath of the death because he was going through an emotional turmoil. He asked politicians, media and NGOs to leave the family alone.

Taken together, these two twists give rise to the following questions: If the family has no doubts about the cause of death, why is the opposition raising a brouhaha? Why are activist-lawyers lobbying for Benches of their choice? By doing so, are these lawyers not casting aspersions on the integrity of the Justices they would rather not appear before in the case? Finally, if they fault the Chief Justice of India for being ‘selective’ in allotting cases, what about their own games, which too amount to fixing Benches? Interestingly, the letter which the four judges wrote to the Chief Justice of India has no mention of the Loya case. And yet, it has today become the pivot for heated debates in television studios and outside.

There is, however, one principal issue that deserves attention, and if there is anything positive that can come out of this unsavoury fracas, it is this: There must be some sort of a transparent mechanism by which the Chief Justice of India allots cases. But it is dangerous to suggest — as some are arguing — that ‘sensitive’ case must necessarily go to the senior-most Justices.

In the first place, such an arrangement would make some judges more equal than the others. Second, it would be tantamount to questioning the professional integrity and competence of the rest of the judges. It must not be forgotten that some of the most politically sensitive cases in recent years were heard and adjudicated upon with a great degree of competence, by not so senior Justices of the Supreme Court. Here are a few of these: 2G Spectrum case, the coal block allocation case, the Aadhaar case, the Vijay Mallya case, the validity of Section 66A case. None of these was handled by senior-most judges of the apex court who occupy court numbers one to four, and yet their verdict had far-reaching and welcome consequences for the country.