Opinion: Chennai to Kashmir - the tale of two funerals 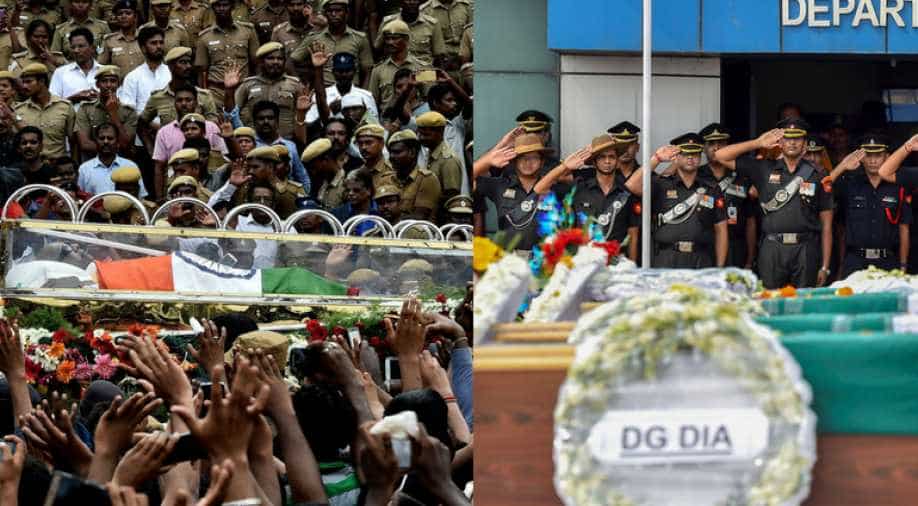 India it seems does not like to highlight its war dead or fallen soldiers.

As Tamil Nadu witnessed Karunanidhi's mortal remains being draped in the tricolour make its way through the streets of Chennai, another funeral took place in New Delhi which went unreported but the image remained in the hearts of all those who witness the fall of soldiers at the border almost everyday.

Earlier on Monday, the Indian government had done its job of rattling off numbers in Lok Sabha informing the House that 69 terrorists had been killed along the LoC in the past year with 694 terrorists being "neutralised" and 368 terrorists or suspects been apprehended since 2014 to July, 2018. Bravo!  Great numbers those, but the report failed to highlight the men in uniform who fell fighting those 694 terrorists.

The House was also informed on how last year, till July, there were 191 incidents of violence having taken place in J&K in which 112 terrorists were killed in 69 encounters but again no mention of how many soldiers were martyred in the operation.

India it seems does not like to highlight its war dead or fallen soldiers. Perhaps a new special memorial should be created for all those men who have given their lives protecting the LoC and operations in J&K.

However, as things stand India continues to bleed and with its defence personnel under harsh conditions battling not just the terrorists who present an immediate clear and present danger but also locals in Kashmir who morph into stone-pelters.

It takes a special kind of solider to counter these elements, soldiers as a creed are meant to fight or firefight but counter-insurgency and terrorism does not always form part of their DNA but India expects, as it always does that its soldiers fight and die!

But recognition comes in bits and pieces, whenever the news cycle is dry the news gets highlighted, also during a "major" operation but in low-intensity battles, in everyday fights at the border names are forgotten.

It is time starting this Independence Day that we think about our soldiers at the border and perhaps spare a rose for them, even if we give uninterrupted coverage to Karunanidhi and his final journey to Marina beach.