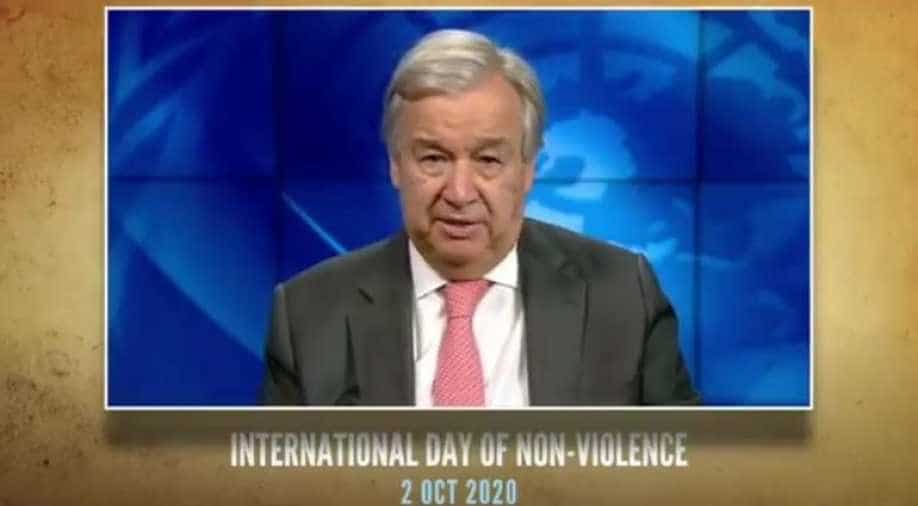 United Nation secretary-general Antonio Guterres has reiterated his call for a global ceasefire amidst the COVID pandemic in his message on the birth anniversary of India's father of the nation, Mahatma Gandhi.

Highlighting the "remarkable power of non-violence and peaceful protest", Guterres said, "its timely reminder to strive to uphold the values Gandhi lived by the promotion of dignity, equal protection for all and communities living together in peace".

Explaining,"This year we have a special duty, stop the fighting to focus on our common enemy COVID 19. Only one winner during a conflict during a pandemic--the virus itself...I have called for a global ceasefire, we need to make this a reality by the end of this year"

Guterres was speaking at a mega first-ever virtual event on the occasion organised by Indian mission to the United Nations. Mahatma Gandhi's birth anniversary on 2nd October is also the international day of non-violence.

The special commemoration included a video that showed reactions from the UN diplomats in the Security Council on Gandhi's assassination. It also showed footage of world leaders, including former US president Barack Obama, citing Gandhi's principles and ideologies during their addresses to the UN General Assembly over the years.

Indian envoy to United Nations TS Tirumurti speaking at the event said," Mahatma Gandhi was born in India but belongs to all humanity. No doubt, non-violence, is and will always be directly relevant to address the burning issues of the day"

Adding, "Gandhi Ji did not see political freedom, only freedom worth fighting for..but also liberating human beings from all forms of bondage and injustice...for him non-violence was a tool to fight injustice"

21 foreign envoys to the United Nations spoke at the event on the relevance of Gandhi to the world and to there country. These were envoys of Afghanistan, Australia, Bangladesh, Bhutan, Brazil, Egypt, Hungary, Indonesia, Ireland, Japan, Lebanon, Maldives, Mauritius, Mexico, Nigeria, Oman, Russia, South Africa, Saint Vincent and the Grenadines, Sri Lanka and the United States.