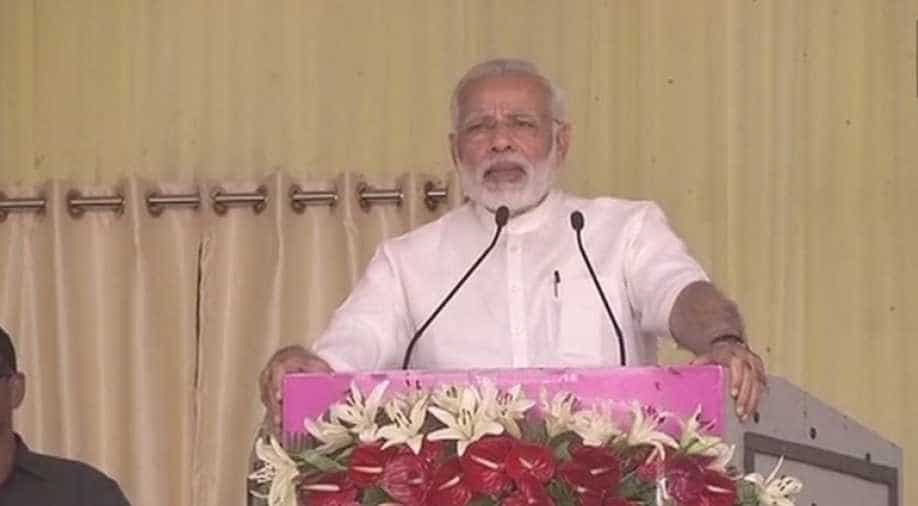 PM Modi said 10 private and 10 public universities will be given a fund of Rs 10,000 Crore over a period of five years to make them world-class. Photograph:( WION Web Team )

Prime Minister Narendra Modi is in Bihar for the centenary celebrations of the Patna University ||PM Modi and Nitish Kumar shared the stage for the first time in eight years ||The university's famous alumnus, BJP leader Shatrughan Sinha sarcastically wrote on Twitter that his invitation came very late

Prime Minister Narendra Modi, who is in Bihar for the centenary celebrations of the Patna University, today praised chief minister Nitish Kumar for his commitment towards the progress of Bihar.

"The commitment of Nitish Kumar ji towards the progress of Bihar is commendable," PM Modi said in his address at Patna University.

PM Modi and Nitish Kumar shared the stage for the first time in eight years.

"When the country celebrates 75 years of independence in 2022, then Bihar should also feature in the list of leading states of the nation. This is what we are aiming and working towards. Chief Minister Nitish Kumar`s plan will help Bihar achieve its goal as seeds sown 100 years ago in Patna University are giving fruits now," PM Modi said.

The prime minister had high words of praise for Patna University, saying that it had given the country top civil servants.

"In every state, the senior level of the civil services has officers who have studied in Patna University," PM Modi said.

He added that Bihar was blessed with both "Gyaan" (knowledge) and the Ganga river.

Shatrughan Sinha sarcastically wrote on Twitter that his invitation came very late and at short notice, "delayed by the more loyal than the King's people". The former actor had earlier told a media outlet that he was "pained" at not being invited for the celebrations.

....even I got an invitaion, alas very late and with a very short notice...delayed by the "more loyal than the King's people" involved..2>3

The actor tweeted his best wishes on the occasion.

PM Modi, whose BJP has an alliance with Nitish Kumar's JD-U in Bihar, said 10 private and 10 public universities will be given a fund of Rs 10,000 Crore over a period of five years to make them world-class.

The prime minister arrived in Patna today morning on a day-long visit to Bihar. He will also lay the foundation stone of several projects including four National Highways worth over 3,700 crore rupees in Mokama. The projects also include a six-lane bridge over river Ganga.

The prime minister addressed a public meeting in Mokama and took note of the large crowds that had gathered for his speech.

"Wherever I can see, people are visible," PM Modi said.

He assured the people that the central and Bihar governments would do "everything possible" for Bihar's growth and that the projects whose foundation stones were being laid would give an impetus to the development of the state.

The prime minister also said that the Railway Ministry had started four special trains so that people in Bihar and north-eastern Uttar Pradesh did not have any difficulty in reaching home for Diwali and the Chhath festival.