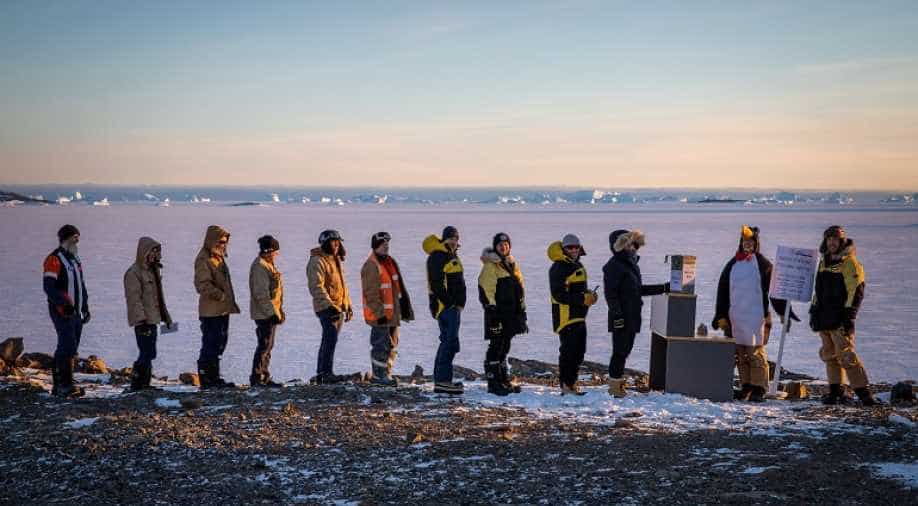 A supplied image obtained on Friday, May 17, 2019, of expedition members as they line up to vote at Davis research station, Antarctica. Photograph:( Reuters )

Australians began voting in a federal election on Saturday, with bookies predicting a return to power for the Labour party after six years in the political wilderness and a campaign in which it has put climate change and tax reform at the top of its agenda.

The International Monetary Fund said on Thursday it was holding its forecast for Sri Lanka's 2019 economic growth at 3.5% in spite of devastating Easter bombings, saying it was too early to assess financial damage.

China's tough rhetoric leaves trade talks with US in limbo

China struck a more aggressive tone in its trade war with the United States on Friday, suggesting a resumption of talks between the world's two largest economies would be meaningless unless Washington changed course.

Talks in Norway this week with representatives of Venezuela's government and the opposition sought to "build a peaceful agenda" for the crisis-stricken South American country, President Nicolas Maduro said on Friday.

The security forces gunned down two terrorists on Saturday morning and one of the body was found in Jammu and Kashmir's Pulwama district during the post counter search.

Among the two, one of them is believed to be Showkat Dar, a Hizb-ul-Mujahideen commander.