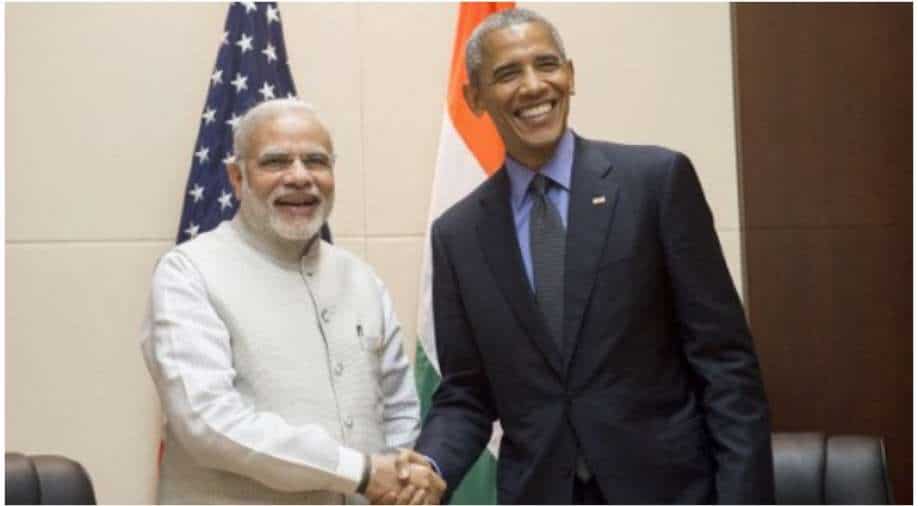 (File photo) Former US President Barack Obama (R) shakes hands with India's Prime Minister Narendra Modi prior to a meeting on the sidelines of the Association of Southeast Asian Nations (ASEAN) Summit in Vientiane on September 8, 2016 Photograph:( AFP )

The global survey was carried out by YouGov. Men's list is dominated by politicians, sportspersons and businesspeople while that of women has more actresses, singers and TV personalities.

India's Prime Minister Narendra Modi was listed as 8th most admired man in the world as per an international survey carried out by YouGov. Former US President Barack Obama has retained his position at the top.

For this survey, 42,000 people from 38 countries were asked who they admired most.

Barack Obama continued to maintain his position at number 1. He had dethroned Bill Gates last year. Among women, Michelle Obama bagged the top spot. Microsoft founder and one of the richest persons in the world Bill Gates is in second spot among men while Chinese President Xi Jinping is on third place.

Indian movie stars have also found a place on the list Shahrukh Khan and Amitabh Bachchan are at 14th and 15th places respectively.

Among women, Angelina Jolie and UK's Queen Elizabeth have followed Michelle Obama in rankings. Women's list has been dominated by actresses and singers. After Jolie, Scarlett Johansson is at number 5, followed by Emma Watson and Taylor Swift. Germany's former chancellor Angela Merkel is in 8th spot. Priyanka Chopra is at number 10. Chopra and Afghan activist Malala Yousafzai have climbed the farthest in the list.

List of most admired men has been dominated by those in political, business and sporting backgrounds. Women's list has more actresses, TV presenters and singers.