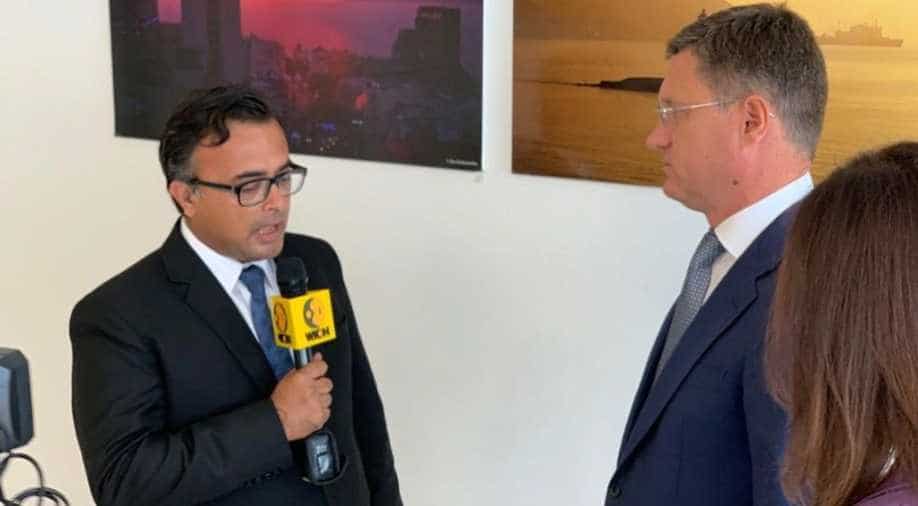 Novak described the Asia Pacific region as the global driver of the economy and hailed Modi-Putin talks as 'very positive'.

In an exclusive conversation, Novak described the Asia Pacific region as the global driver of the economy and hailed Modi-Putin talks as "very positive".

WION: What sort of energy trends are being witnessed in the Asia Pacific and other parts of the world?

Novak: The Asia Pacific region is the global driver of the economy. It is the driver for the demand of energy sources like carbons and other resources. It is also a driving force behind the investment of new technologies. Russia is ready in partnership with all other countries to invest in large scale projects.

WION: What trends do you see between Russia and India on energy security?

Novak: India and Russia are strategic longstanding partners. Right, now we are in at a new stage of the relationship between the two countries because the leaders of the two countries have set forth new ambitious goals. Both Prime Minister Modi and President Putin are committed to promoting close relationship in the energy field which is the backbone of our interaction.

WION: Is, energy the new bulwark between India Russia relationship?

Novak: Energy is the backbone of trade, economic and investment relations between the two countries including the participation and implementation of Sakhalin 1 project. In the last couple of years, a large number of big projects have been implemented including investments of the Indian companies into the production of oil in Russia. I'm referring to one core field Tassurik field besides Rosneft which invested 12 billion dollars in the acquisition of Essar company in India. New large-scale projects have been implemented as well. India is involved in the production and marketing of gas.

WION: India is looking forward to cooperation IN nuclear field and gas. Do you think gas production has also become one of the driving forces between THE two countries?

Novak: India is already a big consumer of Russian gas. There is joint participation with Gasprom. Last year, it supplied 1 million tons of LNG to India. This year Novatek has signed a memorandum of cooperation for the marketing of LNG with two Indian companies. We are always happy to see Indian companies participate in the development of LNG in Russia in the context of the construction of energy plants since it is the strategic goal of the Russian federation.

WION: Can India-Russia relationship be taken to the next level now?

Novak: I'm in close contact with my colleague Dharmendra Pradhan in India. On August 29 he was in Moscow and we had an opportunity to compare the implementation of key and large-scale projects in Russia so that we can achieve goals put forward by the leaders of both countries. On the sidelines of the Eastern Economic Forum, three documents were signed between the ministries of both the countries. The first document to be signed was a programme of cooperation in the area of oil and gas. The second one was on the promotion of gas motor fuel in India and the third was the cooperation of two countries in the power sector. These are mainstream directions in which we are going to move forward.

WION: Do you feel that chemistry between Prime Minister Modi and President Putin has redefined Russia-India relationship?

Novak: Indeed, the relations between the two countries have reached high-level thanks to the personal touch established by Prime Minister Modi and President Putin. In this economic forum, Prime Minister Narendra Modi is our main guest. On Wednesday, both the leaders had a productive meeting. It was very positive. It will give new impetus to the promotion of bilateral ties between both the countries.