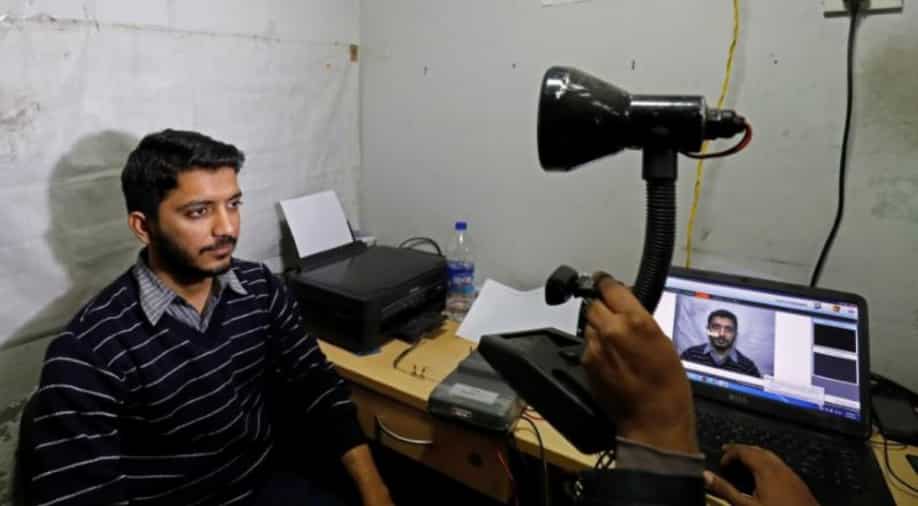 A man goes through the process of eye scanning for the Unique Identification (UID) database system, also known as Aadhaar, at a registration centre in New Delhi, India Photograph:( Reuters )

According to the notice issued by the Union Ministry of Electronics and Information Technology, unlicensed private entities are like hotels and film halls are not allowed to collect or keep copies of Aadhaar card

The Modi government has asked Indian citizens to avoid sharing photocopy of Aadhaar card in a new advsiory.

"Do not share a photocopy of your Aadhaar with any organisation as it can be misused. Alternatively, please use a masked Aadhaar which displays only the last four digits of your Aadhaar number," the government said in a press release.

To download this version, Indian citizens can select “Do you want a masked Aadhaar” option on the official website of Unique Identification Authority of India (UIDAI).

According to the notice issued by the Union Ministry of Electronics and Information Technology, unlicensed private entities are like hotels and film halls are not allowed to collect or keep copies of Aadhaar card.

"Only those organisations that have obtained a User License from the Unique Identification Authority of India can use Aadhaar for establishing the identity of a person," the government stated.

Before sharing Aadhar cards with any organisation, Indian citizens should verify if it has a valid user license from UIDAI.

Advising people to avoid using public computers for downloading their Aadhar cards, the advisory said that "If you do so, please ensure that you delete all the downloaded copies of e-Aadhaar permanently from that computer."

To verify any Aadhar card number online people can visit myaadhaar.uidai.gov.in/verifyAadhaar and for offline verficiation, they can scan the QR code on e-Aadhaar or Aadhaar letter or Aadhaar PVC card using QR code scanner in the mAadhaar mobile application.

Aadhaar is a biometric identification card that is becoming integral to the digitisation of India’s economy, with over 1.1 billion users and the world’s biggest database.

Indians have been asked to furnish their Aadhaar numbers for a host of transactions including accessing bank accounts, paying taxes, receiving subsidies, acquiring a mobile number, settling a property deal, and registering a marriage.