Modi asks NDA MPs to work without discrimination, reach out to minorities 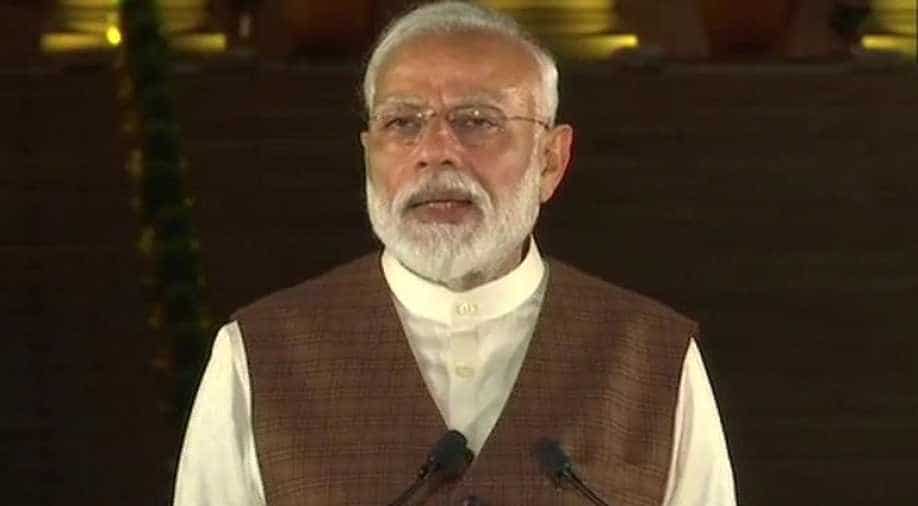 In his over 75-minute address after being elected the leader of the BJP-led National Democratic Alliance, Modi said the massive mandate has multiplied responsibilities, and advised lawmakers on their public conduct, saying they should avoid speaking to the media for publicity and shun the "VIP culture".

All set for a second term as prime minister, Narendra Modi said Saturday his government will now begin "a new journey to build a new India with new energy" and reached out to minorities, saying the ruling alliance has to win their trust and work without any discrimination.

In his over 75-minute address after being elected the leader of the BJP-led National Democratic Alliance, Modi said the massive mandate has multiplied responsibilities, and advised lawmakers on their public conduct, saying they should avoid speaking to the media for publicity and shun the "VIP culture".

However, it was his suggestion to the MPs in his maiden speech to them that they work without any discrimination and win the trust of minorities that stood out as the alliance, especially the BJP, is often criticised for being indifferent to their concerns and not pursuing inclusive politics.

"Our mantra should be 'sabka saath, sabka vikas and sabka vishwas' (with all, for everybody's development and having everyone's trust)," he said in the speech which he began by bowing to the Constitution.

"They (minorities) cannot be handed over to them (Opposition), who benefit because we keep quiet," Modi said at Parliament's Central Hall, accusing his rivals of making minorities live in fear and exploiting them during elections as part of their vote-bank politics.

He said the poor were deceived all these years but his government managed to break through this "deception" and improved their lot and asked NDA MPs to similarly smash through the deception around minorities.

It would be good if their education, social and economic standards are lifted up, he said, lamenting the minorities were instead made to live in an "imaginary fear".

"We have to break through this deception. We have to win their trust... It is a big responsibility that we have to fulfil. Those who vote us are ours and even our most trenchant opponents are ours. We cannot believe in any discrimination," he said.

Invoking the 1857 war against the British rule, he said all communities worked shoulder-to-shoulder for self-rule then and called for replicating a similar unifying spirit for good governance now as India readies to celebrate the 75 years of independence in 2022.

"The Constitution is supreme for us. Whatever form of worship we follow at home but outside there cannot be a bigger God for us than Bharat Mata (Mother India)," he said, likening the country's 130 crore citizens to 130 crore 'Gods' who should be served by the ruling alliance with a similar spirit.

The BJP-led NDA that won 353 of the 542 Lok Sabha seats for which elections were held, made huge inroads in different sections of society.
However, minorities mostly voted for the opposition due to their wariness over BJP's Hindutva politics, political watchers believe.

"We stand for those who trusted us and also for those whose trust we have to win... We have to take everyone along to take India to new heights in the 21st century," Modi said.

With speculation rife over who will join his Council of Ministers, Modi said he was yet to go through the details of all the NDA MPs and asked them to not trust media reports in this regard, adding they are aimed at creating confusion and often put out with "bad intentions".

Many "Narendra Modis" have cropped up in the country, giving out ministerial positions to MPs, he said wryly and added that newspaper reports do not make ministers.

Responsibilities will be given as per norms, he stressed.

There was a pro-incumbency sentiment in this election and its result was a positive mandate, he said, adding that there is no better path than serving people when in power.

He also called for the NDA to work with cohesion for the country's development and said his "naara" (slogan) for the alliance is "national ambition and regional aspirations".

Asking MPs to work together with him, he said they should shun arrogance as it is people not their personality, any caste or Modi who elected them.

The vote share of BJP and its allies rose over 25 percentage points in this general election, he said, adding in a lighter vein that in absolute terms the rise is as much as the votes polled by US President Donald Trump.

"Wave" is a light word to describe the mandate the NDA has received, he said, noting that the NDA won more than 50 per cent votes in 17 states.

He said the NDA will work to meet national ambition with regional aspirations and invoked BJP stalwart Atal Bihari Vajpayee to underscore his party's commitment to the National Democratic Alliance, first stitched during Vajpayee's time.

There should be energy and synergy in the alliance, he said.

The BJP has had uneasy relations with some of its allies in the last five years before it worked to repair them ahead of the 2019 election.

All of its allies, including JD(U)'s Nitish Kumar, Shiv Sena's Uddhav Thackeray and Akali Dal's Parkash Singh Badal, were on the dais when Modi spoke to the lawmakers.