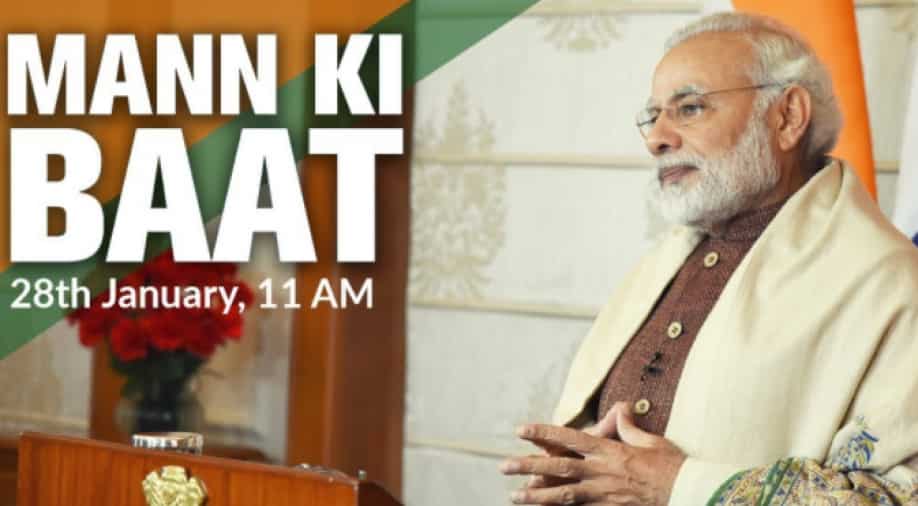 This is the 40th edition of the Mann Ki Baat programme.

The monthly radio programme which Modi first began in 2014, shortly after the BJP came to power at the Centre, is the Prime Minister’s attempt to speak to the common man directly and sometimes features letters from the public.

Mission Clean Morna River is a wonderful initiative, where people came together to clean the river. Mangesh from Maharashtra shared a touching photograph on the NM Mobile App, of an elderly person and a young child taking part in the movement to clean the Morna river.

I want to talk about something very unique in Bihar. A human chain was formed to spread awareness about evils of Dowry and child marriage. So many people joined the chain.

Darshan from Mysore, Karnataka has written on My Gov. He was undergoing an expenditure of six thousand rupees a month on medicines for the treatment of his father. Earlier, he wasn't aware of the Pradhan Mantri Jan Aushadhi Yojana.

But now that he's come to know of the Jan Aushadhi Kendra, he has begun purchasing medicines from there and expenses have been reduced by about 75%. He has expressed that I mention this in Mann Ki Baat, so that it reaches the maximum number of people and they can benefit towards affordable healthcare and 'Ease of Living.'

I want to talk about something very unique in Bihar. A human chain was formed to spread awareness about evils of Dowry and child marriage. So many people joined the chain.

I want to appreciate the women of Dantewada in Chhattisgarh. This is a Maoist affected area but the women there are operating e-rickshaws. This is creating opportunities, it is also changing the face of the region and is also environment friendly.

It is in our culture to respect women. In our ancient Sanskrit teachings, it is stated that the blessings we get from the almighty if we have one baby girl is equal to that of having 10 baby boys.

India's Woman Power has contributed a lot in the positive transformation being witnessed in our country and society.

A few days ago, Honourable President of India met women achievers, who distinguished themselves in various fields.It is in our culture to respect women.

Women are advancing in many fields, emerging as leaders. Today there are many sectors where our Nari Shakti is playing a pioneering role, establishing milestones.

Kalpana Chawla inspired all of us, says PM Modi. It is our culture to respect women, he says.

Having a daughter equals to 10 sons.

PM Modi says a citizen Prakash Tripathi wrote on the NM App: “1st February is the death anniversary of Kalpana Chawla. She left us in the Columbia space shuttle mishap, but not without becoming a source of inspiration for millions of young people the world over.”

This is the first episode of Mann Ki Baat in the year 2018. Just a few days ago, we celebrated our Republic Day with great fervour. This is the first time in history that heads of 10 Nations attended the ceremony: PM Modi.