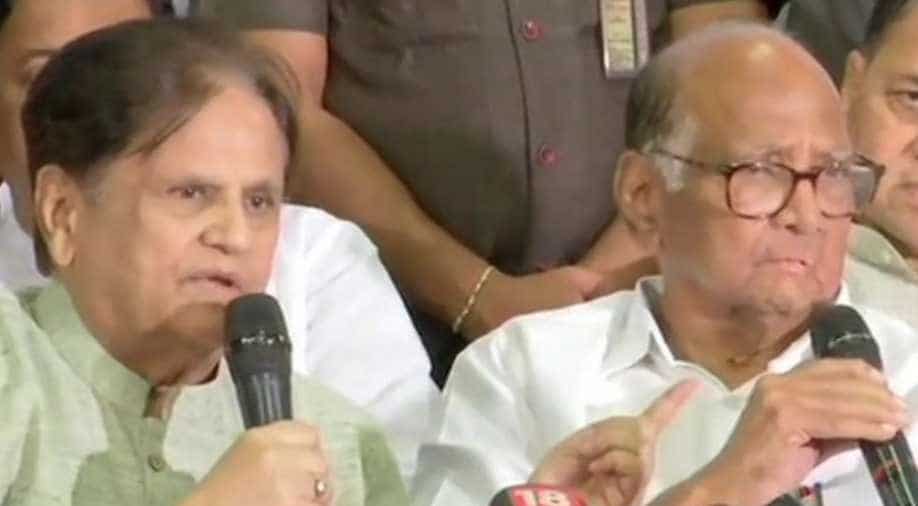 Top brass of the Nationalist Congress Party on Tuesday held talks with senior Congress leaders in Mumbai on the ongoing impasse over government formation in Maharashtra.

NCP chief, Sharad Pawar, told media that the party is in no hurry and will further discuss with Congress on the move to support Shiv Sena to form the government in Maharashtra.

"We are in no hurry. We will hold discussions with Congress and then take a decision (to support Shiv Sena)," Pawar said.

NCP Chief Sharad Pawar: We are in no hurry. We will hold discussions with Congress and then take a decision (to support Shiv Sena). #MaharashtraGovtFormation pic.twitter.com/MYYYgEpKv0

Patel also condemned the fact that Congress did not get an invite from the Governor to form the government when Shiv Sena, the BJP and the NCP did.

Earlier in the day, Maharashtra was placed under the President's Rule after political parties like the BJP, the Shiv Sena and the NCP failed to claim power in the state.

Spokesperson, Ministry of Home Affairs stated that the Maharashtra Governor was of the view that the imposition of President's Rule was better in a situation where none of the political parties are been able to form the government.

"Maharashtra Governor was of the view that it has been 15 days since the conclusion of electoral process and none of the political parties are in the position to form a government in the state; President's Rule is a better option," the spokesperson said as reported by news agency ANI.

Shiv Sena's lawyer Sunil Fernandes says, "SC registry has said they may mention the matter tomorrow before the court, for urgent hearing. Fresh/second petition challenging the imposition of President's Rule is being readied. The decision on when to file it will be taken tomorrow" https://t.co/iezTlar2jy

The move comes after Maharashtra Governor Bhagat Singh Koshyari recommended President’s Rule in the state and sent a report to the Centre earlier in the day.

Maharashtra Governor Koshyari had given time to the NCP till 8.30pm today to prove that it has the numbers after the Shiv Sena on Monday failed to get letters of support before the deadline set by the Governor who rejected its plea for three more days to do so.

Meanwhile, Uddhav Thackeray-led Shiv Sena has filed a petition in Supreme Court challenging Maharashtra Governor's decision to not extend the time given to the party to prove their ability to form the government. Advocate Sunil Fernandez filed the plea for Shiv Sena.

Shiv Sena said that the matter could be posted before the court tomorrow for urgent hearing. "Fresh/second petition challenging the imposition of President's Rule is being readied. The decision on when to file it will be taken tomorrow," Fernandes said.

COVID-19: JEE-Advanced for admission to 23 IITs postponed, likely to be held in May