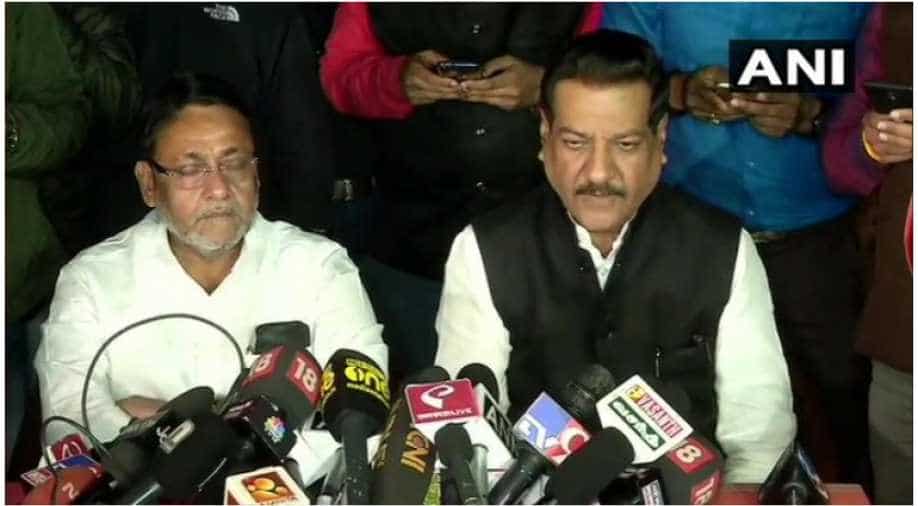 The Congress and NCP will able to give a "stable" government to Maharashtra, senior Congress leader said on Wednesday.

Addressing a press conference, former CM Prithviraj Chavan said that both Congress and NCP had long and "positive" discussions today, adding that they will soon form a stable government in Maharashtra.

Prithviraj Chavan, Congress on Maharashtra govt formation: Congress-NCP has had long and positive discussions today. Discussions will continue; I am sure we will be able to give a stable govt to Maharashtra very soon. pic.twitter.com/148KbFDhs0

"When three parties form a government, the process becomes long. This process has started today. In coming two-five days, a government will be formed in Maharashtra," Raut said.

However, NCP spokesperson Nawab Malik late on Wednesday said that both Congress and NCP have decided to form an "alternative" government in Maharashtra. He also added that this "alternative" will not be possible without Shiv Sena, NCP, Congress joining hands.

Nawab Malik: Congress-NCP together decided that we must give an alternate govt in Maharashtra. It is not possible without NCP-Congress-Shiv Sena coming together. We are trying our best to resolve all issues. We will provide alternate govt as soon as possible. https://t.co/51osLVVtDA pic.twitter.com/TXG0npr5nM

Last week, all three parties drafted a common minimum programme (CMP) to form government in the state. Senior leaders of NCP and Congress are continuing discussions over finalising the CMP.

Earlier, traditional allies BJP and Shiv Sena had formed an alliance for the Assembly elections in Maharashtra. However, after the results were declared on October 24, both parties had a fallout over the power-sharing agreement. BJP denies Shiv Sena's claims of 50:50 agreement where both parties will have its CM for 2.5 years.

BJP won the maximum number of seats (105) in recently held elections in the state. Shiv Sena, NCP and Congress claimed 56, 54 and 44 seats respectively.  A majority of 145 seats are required in order to form government in Maharastra.