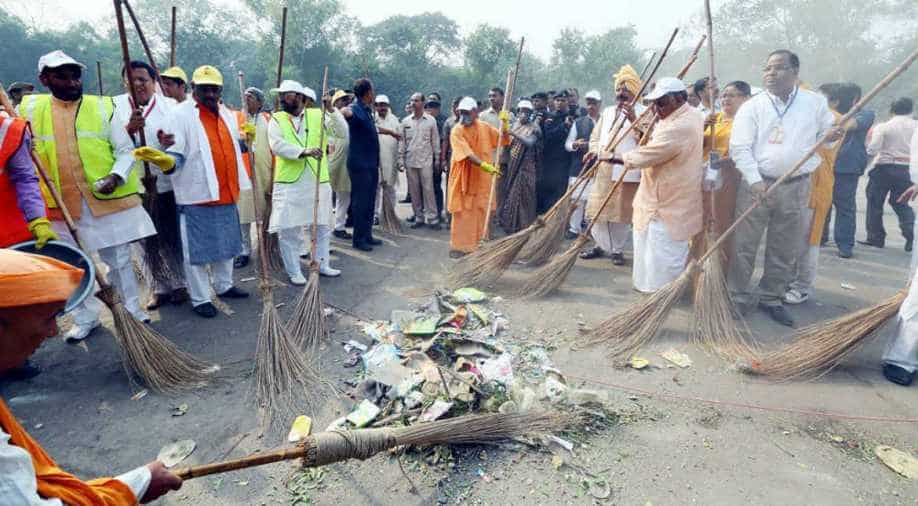 Samajwadi Party chief Akhilesh Yadav on Thursday took a jibe at Chief Minister Yogi Adityanath for his visit to the famous Taj Mahal, saying it is Lord Rama’s 'kamaal' (wonder).

"See how time changes… BJP did not consider it as heritage… And now the CM is cleaning West Gate of Taj Mahal with a 'jhadu' (broom)," Yadav told reporters in Lucknow.

"It's good that SP workers from Agra have come here, otherwise they would have used broom at West Gate of Taj. He (CM) is wielding broom there. We have nothing to do with it. It is Lord Rama's 'kamaal'," he said.

I am waiting for him to get clicked on that seat (in front of Taj Mahal), the former UP chief minister added.

UP chief minister Adityanath went on a cleanliness drive with a broom in hand inside the Taj Mahal area at Agra. (ANI)

The Taj Mahal has been in the news  after BJP MLA Sangeet Som recently said that the monument was a blot on Indian culture.

Countering Som, Adityanath said it does not matter who or why the Taj was built, the fact is it was built by the blood and sweat of Indian labourers.

Adityanath's visit is seen by many as a damage control exercise after a series of controversies erupted, beginning with a UP tourism department booklet not mentioning the white marble monument in its list of development projects in the state.

At a rally in Bihar last year, Adityanath had said that the Taj does not represent Indian culture and that visiting foreign dignitaries should be presented with the Gita rather than replicas of Taj Mahal.