Lok Sabha polls is all about stability versus vulnerability: PM Modi 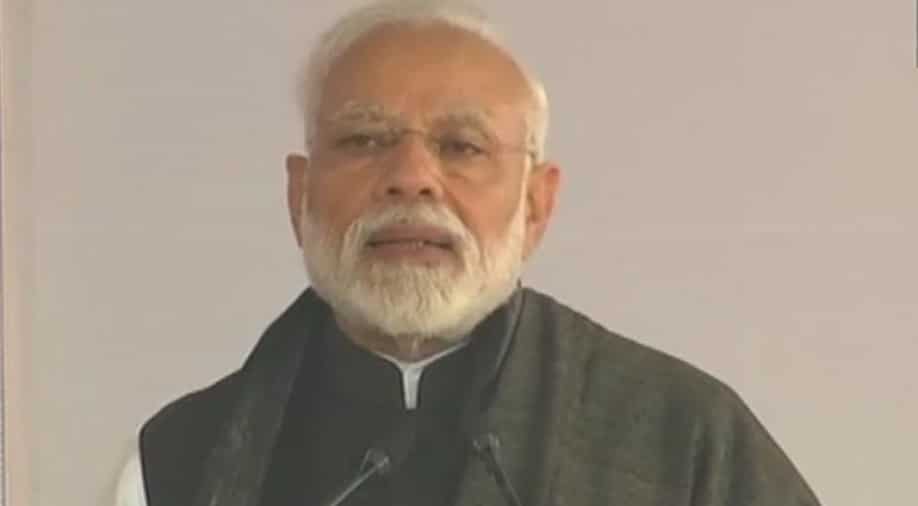 PM Modi took a dig at the DMK-Congress coalition, saying ministers were handpicked not by the prime minister but by those who had nothing to do with public service.

Hitting out at the opposition and dynastic politics, Modi said "My only family is 130 crore Indians. I will live for them. I will die for them," he said.

After launching some projects in the Rail and Road sectors here, Modi also took a dig at Congress leader P Chidambaram, saying the 'recounting minister' has to now apply for bail just like the party's 'first family', apparently referring to the Aircel-Maxis deal.

"The 2019 Lok Sabha elections have two distinct sides. Our side offers strength and stability.

The other offers weakness and vulnerability. Our leaders' work culture is known across India. But the other side is in confusion. They have no name to offer as a national leader and have no vision for India's growth," he said.

Modi has been describing the proposed opposition coalition or 'mahagathbandhan' as 'mahamilavat,' (adulterated).

Recalling the 2009 polls, Modi took a dig at the DMK-Congress coalition, saying ministers were handpicked not by the prime minister but by those who had nothing to do with public service.

"There was telephone bargaining for minister's posts," he said.

He said the NDA government took "historic" steps against corruption under which fake companies have been shut.

"The corrupt has to answer. The famous recounting minister, who took pride in treating badly, insulting the middle class, has to apply for bail just like his party's first family", he said.

Modi has on more than one occasion described Chidambaram as UPA's 'recounting minister'.

Chidambaram, now a Rajya Sabha MP, won the 2009 Lok Sabha election from Sivaganga constituency in Tamil Nadu by a slender margin of 3,354 votes after a seesaw battle.

Confusion had prevailed then as election officials delayed the declaration of the result due to a dispute in the counting of votes in respect of the final round.

Chidambaram, then Home Minister, was declared elected later after the votes were tallied again vis-a-vis the final round.

Modi had made the same "recounting minister" remark during his 2014 Lok Sabha poll campaign and repeated the charge earlier this month at a public rally in Tirpur in the state.

The prime minister said while the NDA government came down heavily on corruption, it was also rewarding the honest tax payers.

"During the budget, exactly a month ago, it was announced that those earning upto Rs five lakh (per annum) will not pay income tax. Those who ruled India for such long years, did not think about middle class," he said.

Hitting out at the Congress, Modi said it was promoting an economic culture which benefited only the friends and family members of 'a big dynasty.'
"If there was someone who spoke out about the economic culture of Congress, it was son of Tamil Nadu C Rajagopalachari.

We are fulfilling the dreams of Rajaji by creating an economy that is reform oriented and people friendly," Modi said.

He also accused the opposition of not having any commitment to social justice and alleged atrocities against Dalits happened during the Congress rule.

"Congress got Dr Bhimrao Ambedkar defeated not once but twice. The Congress did not give Bharat Ratna to Ambedkar for 40 years and it did not put Ambedkar's photograph in central hall of Parliament," Modi said.