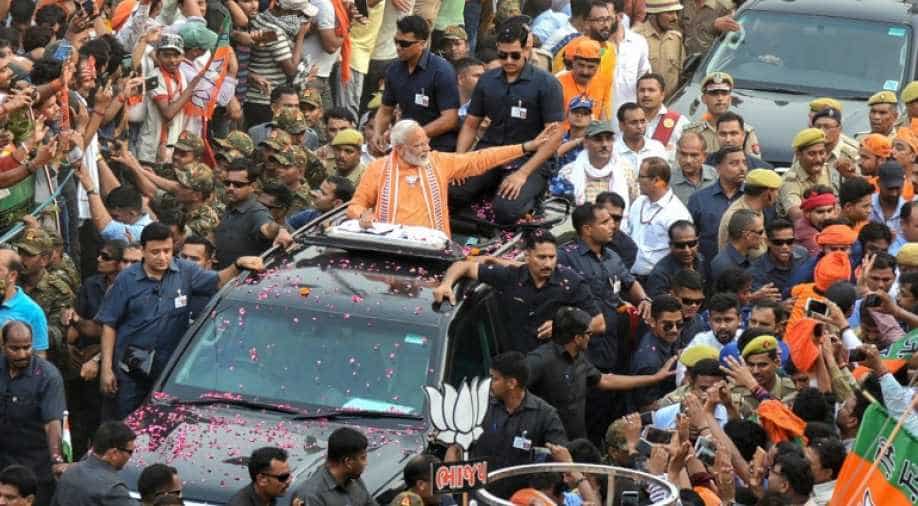 PM Modi waves at supporters during his roadshow, a day ahead of filing his nomination papers for the Lok Sabha polls, in Varanasi. Photograph:( PTI )

According to sources, BJP workers are giving final touches to the itinerary of the day, which includes another road show as Prime Minister proceeds to file his nomination.

All senior leaders of the BJP, NDA and North East Democratic Alliance are expected to be present in the city to mark the occasion. For today, the Prime Minister is expected to begin his schedule with prayers at the iconic Kashi Vishwanath Temple.

According to sources, BJP workers are giving final touches to the itinerary of the day, which includes another road show as Prime Minister proceeds to file his nomination. He may also hold media interaction.

The roadshow began after paying his tributes at Pt Madan Mohan Malviya's statue outside Banaras Hindu University. The rally, stretching over 6km, had passed through Lanka and Madanpura areas of the city and end at the famed Dashashwamedh Ghat.

Before embarking on the roadshow, PM Modi had said that his scheduled programmes in "beloved Kashi" would give him an opportunity to interact with his “sisters and brothers” of the town.

"After bumper rallies in Darbhanga and Banda, I am heading to beloved Kashi. There are a series of programmes lined up, which would give me another excellent opportunity to interact with my sisters and brothers of Kashi. Har Har Mahadev!" Modi had tweeted.

Later in the evening, PM Modi also participated in the Ganga Aarti on the banks of the holy river. After that, he had an interaction with select intellectuals at Hotel De Paris.

PM Modi is contesting against Congress' Ajay Rai and SP leader Shalini Yadav. Congress on Thursday had announced that it would field Rai as its candidate from the Varanasi Lok Sabha seat, putting to rest speculation regarding Priyanka GandhiVadra contesting the general elections against Prime Minister Modi. This would be the second time Prime Minister Modi and  Rai will battle from Varanasi seat.

PM Modi held similar mega road shows in 2014 - both before and after winning the constituency in the 16th Lok Sabha elections. Three years later, the Prime Minister hit the streets of Varanasi for campaigning during the Uttar Pradesh Assembly polls.

In the 2014 Lok Sabha polls, Prime Minister Modi won from Varanasi by a margin of 3.37 lakh votes. AAP leader Arvind Kejriwal and Rai were among the candidates from the seat. While Kejriwal came in the second place, Rai stood third in the vote tally.

Varanasi will go to polls on May 19 in the last phase of the Lok Sabha elections. The counting of votes will take place on May 23.