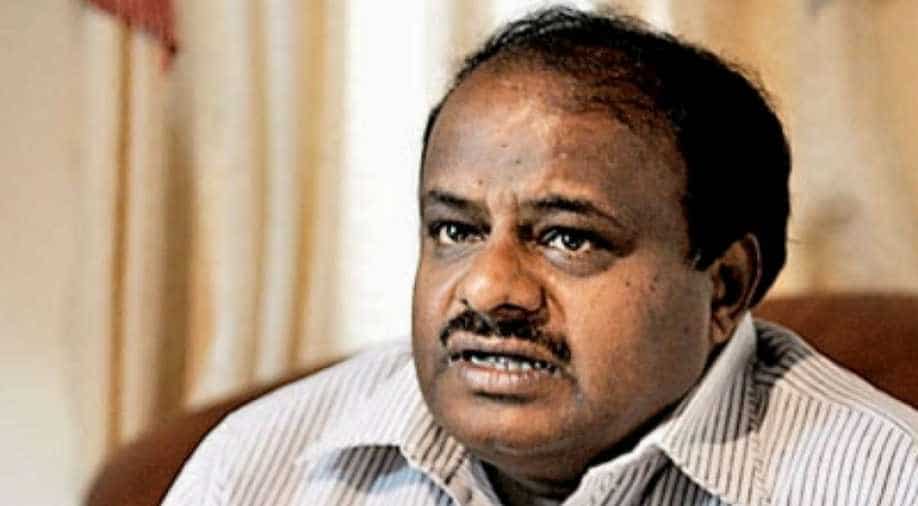 HD Kumaraswamy, who will be sworn in as Chief Minister of Karnataka on Wednesday, will be in Delhi today to meet Sonia Gandhi and Congress President Rahul Gandhi.

Kumaraswamy and the Gandhis will discuss the nitty gritties of government formation in the southern state.

News reports said Monday that the Congress — which has 78 MLAs, the JD(S) now has 37 after Kumaraswamy gave up the second seat he contested from — is expected to end up with 20 ministers in the 33-member cabinet.

There has now been a second demand for a Lingayat to be made deputy chief minister, which may lead to the state having two of them.

The reports added that the Congress would make no demands of the JD(S) in order to keep the coalition stable.

On Sunday, Kumaraswamy termed reports of a power-sharing formula of 30 months each between the two parties as "bogus".

Based on the outcome of discussions with them, a decision will be taken on the number of Congress and JD(S) MLAs who will become ministers, Kumaraswamy added.

BS Yeddyurappa had on Saturday stepped down as the chief minister without facing the floor test in the state assembly as the BJP fell short of numbers, following which Kumaraswamy met Governor Vajubhai Vala, and said he had been invited to form the government.

The May 12 Karnataka assembly polls threw up a hung assembly, with the BJP emerging as the single largest party with 104 seats.

While making it clear that there have been no discussions yet on the portfolio allocation, Kumaraswamy requested the media not to create confusion among the public and MLAs with such "speculative" reports.

He also asserted that within 24 hours of taking oath, he would prove his majority on the floor of the House.

"Mostly on Wednesday there will be oath-taking ceremony after that on Thursday we will complete the process of Speaker's election and trust vote," he added.

After meeting the governor, Kumaraswamy had said the swearing-in ceremony would take place tentatively between 12 noon and 1.50 pm at Kanteerava stadium on May 21.

But, later he announced that the event would be held on May 23 as May 21 happens to be the death anniversary of former Prime Minister Rajiv Gandhi.

The venue of the swearing-in is also likely to be changed, with party sources now saying it is likely to take place at Vidhana Soudha (the seat of the state legislature).

However, Kumaraswamy said he had spoken to the Chief Secretary and other senior officials about it and they would take a call on the venue.

Kumaraswamy met his father and former Prime Minister HD Deve Gowda at his residence on Sunday and later visited the hotel where JD(S) MLAs are camping and held a meeting with them.

Asked about reports on power-sharing formula of 30 months each that is being worked out with the Congress, Kumaraswamy said, "No such talks have taken place."

On reports about parleys with Congress leaders regarding elections in Rajarajeshwari Nagar and Jayanagar assembly constituencies, Kumarasamy described it as "bogus".

While polling was deferred in Rajarajeshwari Nagar constituency over allegations of electoral malpractice, election to Jayanagar seat was countermanded following the death of the BJP candidate.