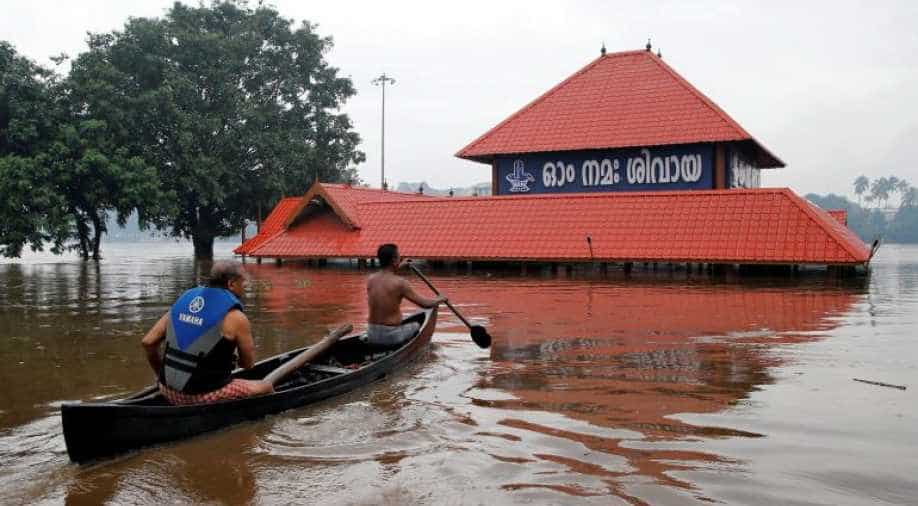 Members of a rescue team row a boat towards a submerged temple to look for a man believed to be stranded inside the temple during heavy rains on the outskirts of Kochi in Kerala. Photograph:( Reuters )

Malappuram remained the most affected district where 43 people have lost their lives so far.

The death toll due to floods on Thursday afternoon mounted to 104, according to data of the Kerala State Disaster Management Authority (KSDMA).

KSDMA has released a district-wise data between August 8 and August 15 till 3 pm in which it stated that 36 people were still missing across the rain-ravaged state while 35 injured due to flood-related incidents.

Malappuram remained the most affected district where 43 people have lost their lives so far.

Among 14 affected-districts, 17 deaths were reported from Kozhikode, 12 from Wayanad, and 9 from Kannur.

On August 14, Chief Minister Pinarayi Vijayan announced a compensation of Rs 4 lakh for the families of people who lost their lives due to floods in the state. IMD has predicted "heavy rainfall" at isolated parts over Kerala this week. The Meteorological Department has also advised fishermen not to venture into those areas.

Meanwhile, Prime Minister Narendra Modi on Thursday expressed solidarity with the flood-affected states and assured all possible support required in tackling the situation.

"Today, when we are marking Independence Day, many of our citizens are suffering due to floods in various parts of the country. We stand in solidarity with those who are affected by the floods and I assure them all possible support that is needed will be provided," he said, addressing the nation on the 73rd Independence Day from the ramparts of the Red Fort.

Hundreds of lives have been lost in flood-hit Kerala, Karnataka, Maharashtra, Gujarat, Bihar and Assam where thousands of hectares of crops have been washed away.

Roads and rail lines were also damaged. In his address, the Prime Minister stressed on the need for water conservation and said that is why the Ministry of Jal Shakti has been formed.

Terming as unfortunate that a large number of people do not have access to suitable water even 70 years after Independence, he said, "Work on the Jal Jeevan Mission will progress with great vigour in the years to come."

The Ministry of Jal Shakti was formed in May by merging of two ministries -- Ministry of Water Resources, River Development and Ganga Rejuvenation and Ministry of Drinking Water and Sanitation, after the return of Modi to power for a second consecutive term.