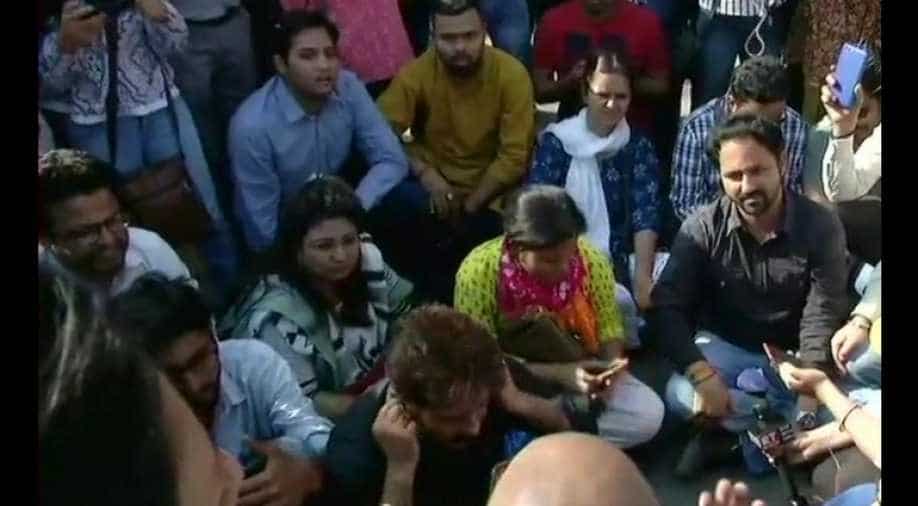 Journalists kept their cameras on the ground as a mark of their protest. Photograph:( ANI )

One woman constable and the head male constable of Delhi police were suspended on Sunday for mishandling a photojournalist of an English daily during a JNU protest on Friday.

One woman constable and head constable (male) of #Delhi Police suspended for mishandling a photo journalist’s camera during crowd control in a protest of JNU students on March 23. Further vigilance enquiry in progress

Further vigilance enquiry of the matter is underway.

The female photographer was mistaken as a protester during the agitation, clarified IPS officer Madhur Verma on Twitter after the incident.

It was an unfortunate incident. Delhi police is always extremely sensitive towards our media friends. It was an accidental happening when women police personnel couldn’t differentiate between protesters and the journalist.

The suspension of the officer came a day after journalists gathered outside Delhi Police headquarters to protest against the two separate incidents of molestation and manhandling alleged by woman journalists during the JNU protest.

During the protest, journalists kept their cameras on the ground as a mark of their protest. A heated argument was also reported between the journalists and the Delhi Police.

Another woman journalist also filed a complaint against a Delhi Cantt Station House Officer alleging molestation during the JNU protest on Friday.

Several JNU students and teachers were detained on Friday as they agitating over the compulsory attendance rule and the removal of several department heads.

The protest march of the JNU students JNU Teachers' Association (JNUTA) was also halted by police at the national capital's INA Market.

To control the situation, water cannons had to be used on the protesters who were marching from the university campus to the Parliament.