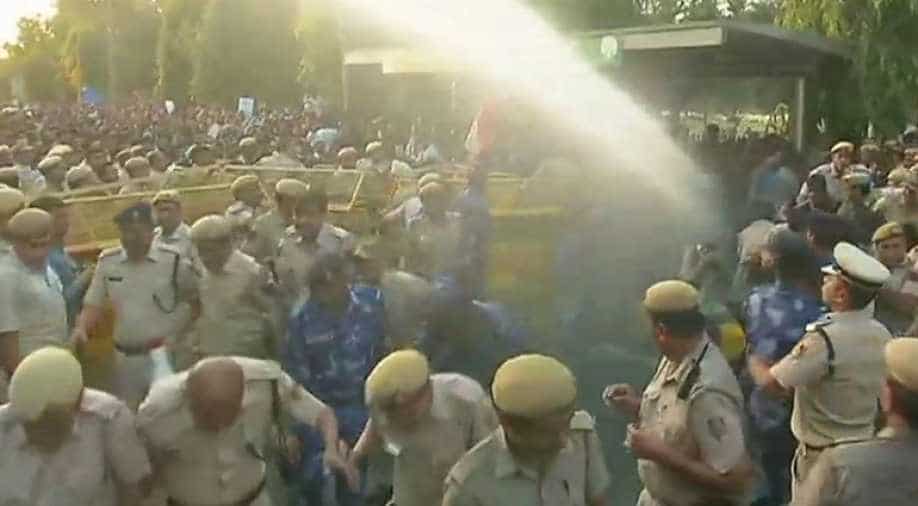 Police had to resort to water cannons to disperse the protesters. Photograph:( ANI )

The Delhi Police on Friday detained JNU students and teachers agitating over the compulsory attendance rule and the removal of several department heads.

The protest march of the JNU students and JNU Teachers' Association (JNUTA) was halted by police at the national capital's INA Market.

Water cannons had to be used on the protesters who were marching from the university campus to the Parliament.

JNU protesters detained by Delhi Police, water cannon used. They were marching from university campus to the Parliament. #Delhi pic.twitter.com/22CzbpXr0U

The Jawaharlal Nehru University Teachers Association (JNUTA) had on Thursday announced a march to Parliament on Friday in support of their demands including immediate withdrawal of notifications replacing chairpersons who were opposed to implementing compulsory attendance.

The teachers' body had requested other associations to join the protest march.

Their other demands include withdrawal of the executive council decision on constitution of a committee to take action against individual teachers, JNUTA president Sonajharia Minz said.

The JNUTA had earlier launched a three-day 'Satyagraha' inside the campus to raise these demands.

On the University Grants Commission granting full autonomy to JNU, Minz had said, "JNUTA strongly opposes such moves which are being implemented in order to promote privatisation in the name of autonomy. She alleged that this is also a step to free the state from its responsibility of providing easily accessible higher education.

"In these circumstances we are left with no other option but to intensify our struggle to save the public university," she had said.

The JNU administration has appealed to students and professors to restore normalcy in the campus and allow the institution to function without interruptions.