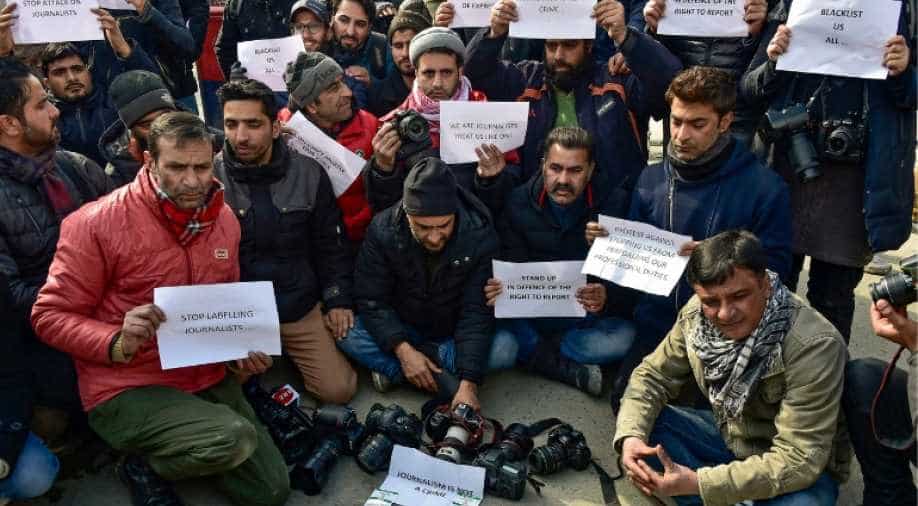 Kashmir journalists hold placards during a peaceful protest after some of them were barred entry to cover the 70th Republic Day function at Sher-e-Kashmir Cricket Stadium, in Srinagar. Photograph:( PTI )

Jammu governor's advisor K Vijay Kumar has said that the issue of some journalists not being permitted to cover the Republic Day function would be looked into.

Journalists here Saturday staged a protest against Jammu and Kashmir government after several scribes were allegedly not allowed to enter the venue of Republic Day function despite possessing valid accreditation passes.

However, Governor's advisor K Vijay Kumar said in Jammu that the issue of some journalists not being permitted to cover the Republic Day function would be looked into.

The media persons, carrying placards which read "journalism is not a crime", staged the protest at Residency Road here.

They alleged some of their colleagues were denied entry to Sher-e-Kashmir cricket stadium -- the main venue for Republic Day celebrations even when they had been issued the accreditation passes by the concerned authorities.

They also claimed that some of the accredited journalists were not even issued the passes.

Kumar said the entire process of security clearance for issuance of passes to journalists shall be reviewed for better coordination in future.

"It is learnt that today at Republic Day parade venue in Srinagar some journalists were not permitted to cover the event as the security passes issued to them were found not to be authenticated. The matter shall be looked into," Kumar, who is in charge Home Department, said in a statement issued in Jammu.

He said it has been given to understand that primarily the incident occurred because of the procedure followed by the police for the issuance of security passes during such events.

"The entire process of such security clearance shall be reviewed for better coordination in future," he said.