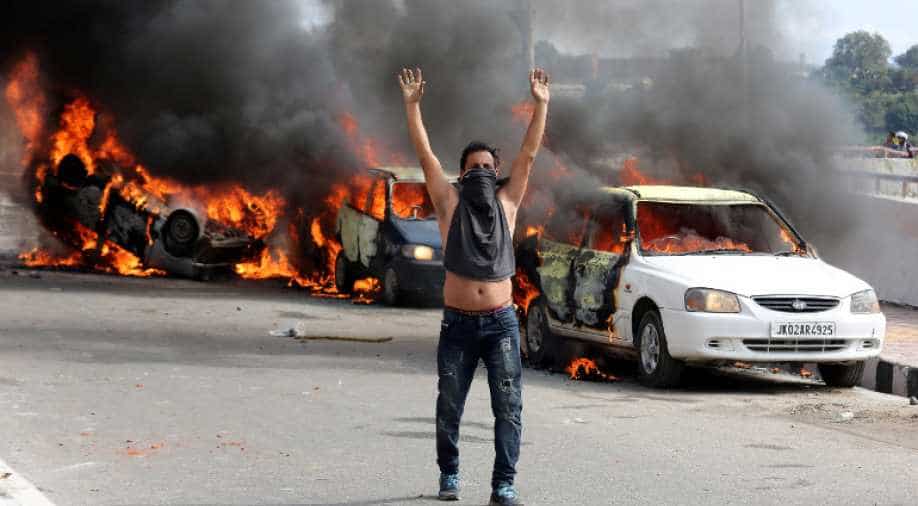 A demonstrator reacts next to burning cars during a protest against the attack on a bus that killed 44 Central Reserve Police Force personnel in south Kashmir on Thursday, in Jammu. Photograph:( Reuters )

'The governor directed the police to take strict action without mercy against those indulging in any type of violence, arson or rumour-mongering irrespective of political and religious affiliation,' an official spokesman said in Jammu.

Jammu and Kashmir Governor Satya Pal Malik Saturday directed the state police to take "strict action without mercy" against those indulging in violence in the aftermath of a terrorist attack in Pulwama in which 40 CRPF personnel died, an official said.

Reviewing the law and order situation at a high-level meeting at Raj Bhavan, Malik also urged people to maintain communal harmony, so that the forces trying to disrupt peace in the state are defeated.

"The governor directed the police to take strict action without mercy against those indulging in any type of violence, arson or rumour-mongering irrespective of political and religious affiliation," an official spokesman said in Jammu.

The direction came after incidents of violence and stone-pelting were reported from Jammu city. A curfew was imposed in the city after several vehicles were torched on Friday.

The violence happened during protests against the attack in Pulwama on Thursday.

The spokesman said the governor also reviewed the security of students from Jammu and Kashmir studying in universities and colleges across the country.
Officials informed Malik that liaison officers were working effectively and coordinating with university authorities and the local police to ensure safety of the students, he said.

In all three places, liaison officers worked with the deans and vice chancellors to ensure safety of the students, the spokesman said.

Jammu divisional commissioner held a meeting of the Peace Committee Friday. In the meeting, all parties condemned the violence in Jammu and agreed to restrain their supporters from indulging in any unlawful behaviour.

Malik asked all political parties and senior political leaders to appeal to people to maintain peace and harmony. He urged them not to pay heed to rumours, the spokesman said.

"People of the state have always believed in mutual brotherhood and co-existence throughout the ages," the governor said during the meeting.