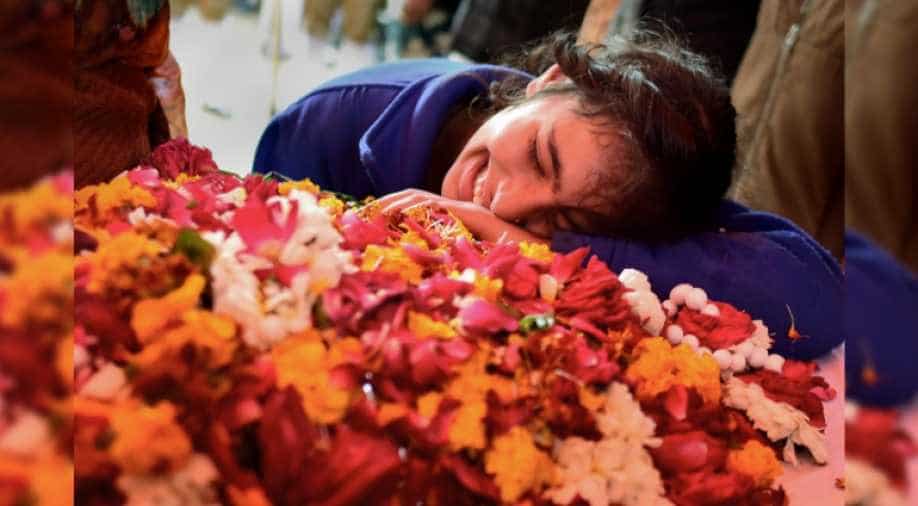 A family member of CRPF jawan Mahesh Yadav cries before his funeral in Tudihar, Allahabad. Yadav was killed in the Pulwama attack. Photograph:( PTI )

Traders downed shutters and people lined the streets at many places as caskets carrying the remains of the jawans arrived in their villages and towns across the country Saturday.

Sobbing family members Saturday lit the funeral pyres of the CRPF jawans killed in the Pulwama terror attack, joined by other mourners who at places gathered in their thousands.

In an Uttarakhand village, a three-year-old child lit his father's pyre. At another cremation in Rajasthan, a two-month baby was made to symbolically touch the torch used for the last rites.

Traders downed shutters and people lined the streets at many places as caskets carrying the remains of the jawans arrived at their native villages and towns across the country, amid the chanting of slogans, some of them anti-Pakistan.

Union ministers flew down from New Delhi to join ministers from the states to lay wreaths on the caskets of many of the 40 jawans killed in the suicide attack on the Jammu-Srinagar highway on Thursday.

In most cases, the coffins draped in the tricolor arrived from Delhi at the nearest airport, and were then taken by road to the jawans' villages for state funerals.

Union Minister of state for Textiles Ajay Tamta and Uttarakhand minister Yashpal Arya were at the cremation, where CRPF jawans fired three rounds in the air as a salute to their fallen colleague.

Shopkeepers in nearby Khatima, Chakarpur and Jhankat downed shutters. People taking part in a procession in Khatima shouted anti-Pakistan slogans.

In Ghalauti Khurd in Punjab's Moga district, Jaimal Singh's five- year-old-son Gurprakash lit the pyre. Rohitash Lamba's two-month son was made to symbolically touch the torch that lit his pyre in Shahpura town near Jaipur.

Thousands of people, including Union minister Jitendra Singh, attended the burial of head constable Naseer Ahmad at Dudasunballa village in the border district of Rajouri in Jammu and Kashmir.

Officers from the Central Reserve Police Force and the Army also visited the village to pay homage, promising to take care of the jawan's family which includes his wife and two children, officials said.

Defence Minister Nirmala Sitharaman laid a wreath on the coffin of C Sivachandran at Tiruchirappali airport, where his body had been flown on the way to his village.

As Pankaj Tripathi's body reached Harpur Bailhiya in Uttar Pradesh's Maharajganj district, the villagers broke out in slogans hailing him as a martyr, and also chanting "Pakistan murdabad".

Taking the cue from Prime Minister Narendra Modi's remarks, Union Minister Shiv Pratap Shukla, who attended the funeral, said, "India will give a befitting reply to the cowardly act of Pakistan."

He announced that the local primary school will be renamed after the jawan.

"My son was coming soon to meet me, but it seems that something else was written in my fate," his mother told reporters.

Uttarakhand's Trivendra Singh Rawat, Himachal Pradesh's Jai Ram Thakur and Odisha's Naveen Pathak were among the chief ministers who paid homage as the remains of soldiers from their states arrived.

"The nation will fight unitedly to protect the sovereignty of our country. Basumatari's sacrifice, along with that of the other CRPF jawans, will not go in vain," he told reporters.

UP minister Anupama Jaiswal and other leaders were trying to persuade her to go ahead with the last rites.