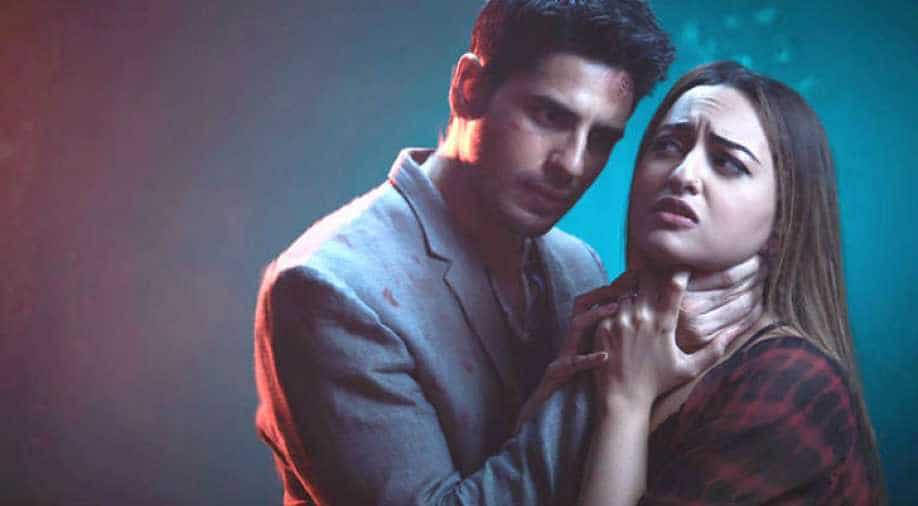 A still from the poster of the film. Photograph:(Others)
Follow Us

Whodunnit mysteries can be tricky to make. And if it is a remake of sorts of an already known film, it becomes even harder to generate curiosity around the film. First time director Abhay Chopra's Ittefaq, starring Sonakshi Sinha, Sidharth Malhotra and Akshaye Khanna keeps the basic structure of the original film intact; yet changes the film to make it suitable for the modern times. Does it work? Mostly, yes.

Having found his wife Catherine's dead body in the hotel room and subsequently being accused of murdering her, writer Vikram (Sidharth Malhotra) is on the run. The film opens with a car chase sequence across Mumbai roads. As his car turns turtle, Vikram manages to escape the police and lands up taking refuge at Maya's (Sonakshi Sinha) apartment. As police follow Vikram to Maya's apartment, they find him standing next to Maya's husband Shekhar's body and arrest him.

The story is then taken forward with two very different versions of the same murder. One where Vikram states he was wrongly framed by Maya in Shekhar's murder and then the other version by Maya - where she states Vikram forced entry into her apartment and while trying to save her, Shekhar got killed by Vikram.  It is then up to Dev (Akshaye Khanna), the investigative officer of the case, to find out the truth and arrest the murderer.

The film's taut screenplay helps in keeping the viewers engaged throughout its runtime. The narrative keeps going back and forth, each time with a different version of the same story- one of Vikram's and the other of Maya's. The non-linear narrative helps to keep one guessing on who is speaking the truth.

Shot by Michal Luka, the frames play an integral part in keeping the mystery alive. Most of the scenes have overall hue of grey, indicating that none of the characters on screen are plain black or white. One barely gets to see the faces of the leads properly in most part of the film and their actual faces are only visible fully near the climax as slowly the mystery is unraveled.

Among the actors, Akshaye Khanna is in top form as the wry yet self-assured cop. Khanna's character gets to deliver some of the best lines in the film and his cool-as-cucumber act does not appear out of place. It is quite refreshing to see Khanna playing an author-backed role after ages, in fact. The lead pair, Sidharth Malhotra and Sonakshi Sinha also deliver commendable performances. Both fit their characters well and are pitch perfect in playing the mysterious characters. Their initial scenes are a tad rough but eventually, the act stabilizes and they both manage to intrigue.

The film is devoid of songs which works immensely for the film- because we all know how unnecessary the songs are especially in a whodunnit.

Above all, what works for the film is that narrative never loses pace- not even in the dreaded second half. I found myself on the edge of my seat during most part of the second half, keenly following what was unfolding on the big screen. With a runtime of a little over two hours, Ittefaq keeps you guessing until the end.

Should you be watching Ittefaq? Most certainly yes. It has got in place the basic ingredients of a good murder mystery. It's edgy, engaging, sleek and you can't foresee the big twist in the end.