India's history is unparalleled in the world, says President Ram Nath Kovind at 'The Huddle' 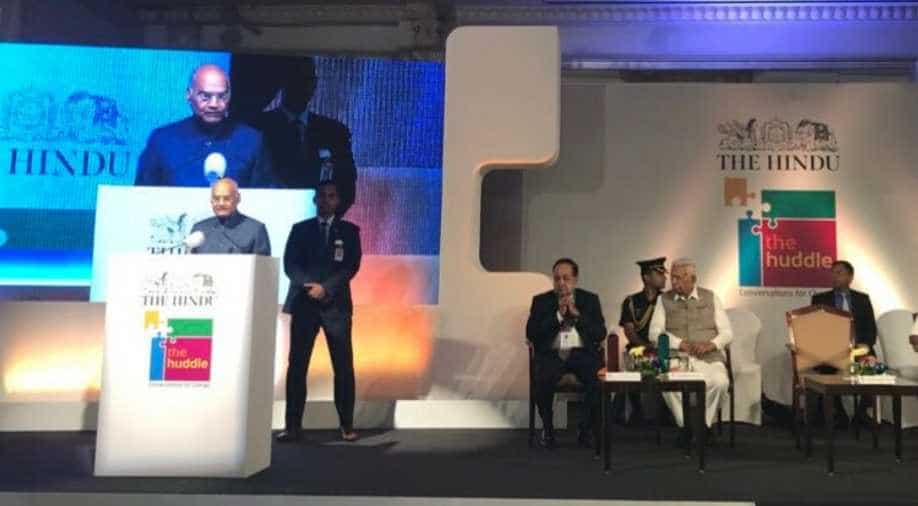 Lauding the event, President said, The Huddle is a platform for the churning of thought on a variety of issues that concern people.

India's history is unparalleled in the world, President Ram Nath Kovind said while inaugurating 'The Huddle', a two-day conclave organised by India's leading daily, 'The Hindu'.

Lauding the event, President said, The Huddle is a platform for the churning of thought on a variety of issues that concern people.

"You all deserve appreciation for organising 'The Huddle' as a platform for the churning of thought on a variety of issues that concern people. I am sure that the nectar, that is, Amrit, coming out from the churning would benefit the nation and the world," President said in his inaugural speech.

President also said, "Debate and discussion are internalised in India’s social psyche to arrive at truth since time immemorial."

"Long before the West discovered the benefits of democratic decision-making, Sant Basaveshwara, a 12th-century philosopher endowed with extraordinary wisdom, had promoted a culture of collective discussion which was called ‘Anubhav Mantapa’," President said.

"This is remembered as one of the world’s first parliaments where people were encouraged to speak their mind irrespective of their social status. This was also a unique experiment of gender equality as women were also encouraged to take part in discussions and express their views," President Kovind added.

"We, the people of India are blessed to have sages like Bhagwan Basaveshwara among our ancestors," he also said.

During the speech, President Kovind also pointed out that sometimes dogmas and personal prejudices distort the truth.

"In the 150th year of Gandhiji’s birth, let us ponder upon this question: Will it not be proper to pursue truth itself as the ideology? Gandhiji has shown us the path by walking ceaselessly in search of truth which would ultimately encompass every positive attribute that enriches the universe."

"Truth exists in an absolute form which cannot be eclipsed by blinkers of prejudices. It cannot be a case of 'your truth' versus 'my truth'. Truth has to be on."