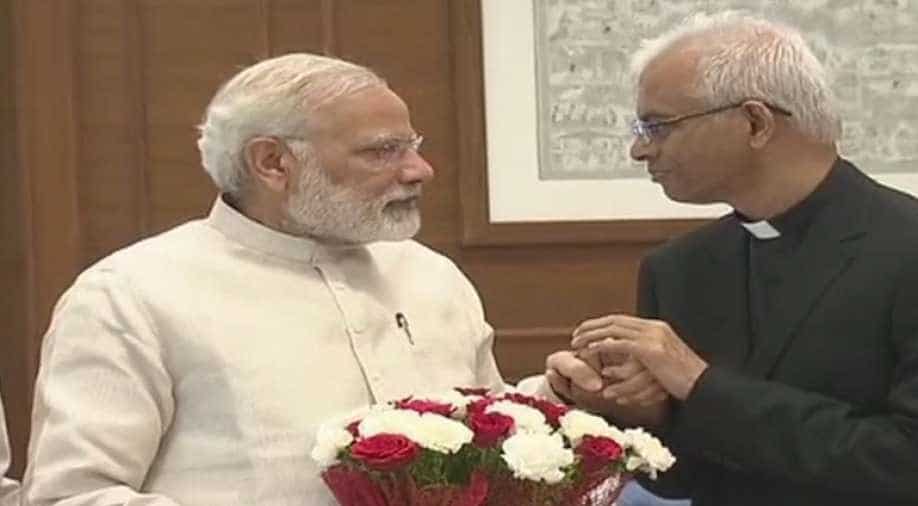 His demeanour, as he posed for pictures with government officials was in stark contrast to his worn out and frail photograph tweeted by Sushma Swaraj two weeks back ||External Affairs Minister Sushma Swaraj announced on September 12 that he had been released and had reached the Vatican

Father Tom Uzhunnalil, an Indian priest from Kerala who was rescued from the captivity of the Islamic State earlier this month and was in Vatican City, reached Indian capital New Delhi met Indian Prime Minister Narendra Modi and external affairs minister Sushma Swaraj.

His demeanour, as he posed for pictures with government officials was in stark contrast to his worn out and frail photograph tweeted by Sushma Swaraj two weeks back from a video appeal for help in May.

Soon afrer his arrival in New Delhi, the Indian priest thanked the almighty for his rescue from Yemen over a year after he was abducted by IS.

"I am very happy, I thank the almighty for making this day possible. All people who have worked in their own ways, I am grateful," Father Uzhunnalil told the press after his arrival in New Delhi.

Father Tom Uzhunnalil, who was rescued from ISIS captivity arrives in Delhi pic.twitter.com/CUpjbbyUI3

Father Tom Uzhunnalil was rescued from an undisclosed location in Yemen, will also address a press conference at 4:30 pm which will be followed by a mass in New Delhi's Gol Dak Khana church at 6:30 pm.

The Catholic priest will then fly to Bengaluru to spend a few days with the Salesians Congregation, to which he belongs, the Catholic Church said.

The priest was abducted in March 2016 from the coastal city of Aden after the IS attacked an old people's home run by The Missionaries of Charity. Sixteen people including four Indian nuns were killed in the attack by gunmen posing as relatives of one of the residents at the home.

He will reach Kerala's city of Cochin on October 1 and then head for his hometown Ramapuram in Kottayam district where a grand welcome has been planned for him.

In a video appeal in May, Father Tom had requested his family to make efforts for his rescue, saying that his health was "deteriorating rapidly" and that he required hospitalisation as early as possible.

External Affairs Minister Sushma Swaraj announced on September 12 that he had been released and had reached the Vatican.

India's external affairs ministry, however, did not give any details of the priest’s release.

The Omani government said the priest was recovering in Muscat after being rescued "with Omani help", a media report said citing an official statement.