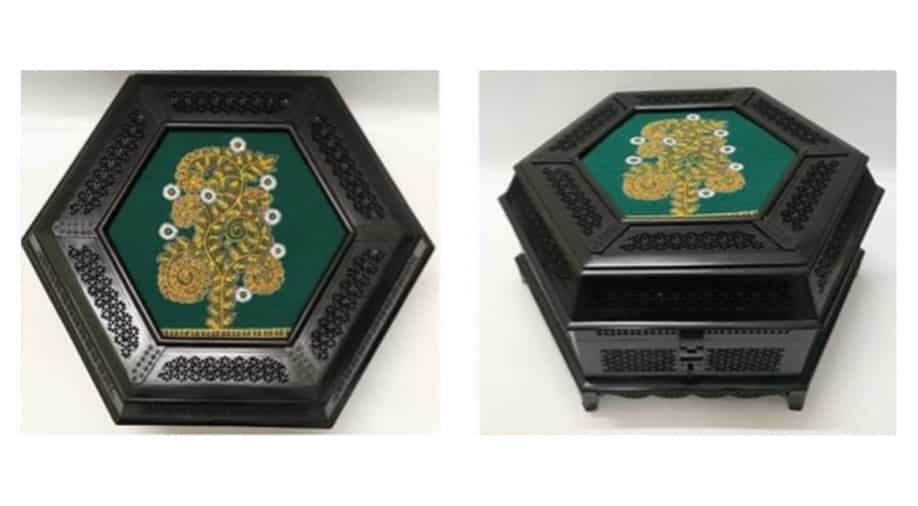 Indian Prime Minister Narendra Modi gifts a wooden carved box with the traditional Rogan painting on it to the Japanese Prime Minister Fumio Kishida during his meeting with him at the sidelines of the QUAD Summit in Tokyo, Japan.

The Rogan painting is usually done on a dark coloured cloth to make the intense colours stand out. The thick and shiny paint is prepared by boiling castor oil (extracted from hand-pounded castor seeds) for a few days and then adding vegetable pigment and a binding agent to it. The pastes are stored in earthen pots with water to prevent them from drying up.

A kalam or an iron rod is used to paint half the design on the cloth with the support of the fingers of the left hand, and then it is impressed on the other half of the cloth by pressing the two sides of the cloth together.

This traditional Gujarati art form is practised by Hindu and Muslim Khatri communities of Gujarat. It has been practised for over a hundred years, but the art nearly died out in the 20th century, and now only a single-family in Nirona, Kachchh is carrying forward the tradition.

They are popular as inexpensive substitutes for embroidered textiles. Usually, skirts, dresses, bedsheets, cushion covers, curtains and table cloths are painted with this technique. Either geometrical motifs or motifs inspired by nature like the tree-of-life are generally preferred.

At the meeting, the two leaders appreciated the growing economic ties between India and Japan and agreed to further enhance ties by focusing on bilateral security and defence cooperation, including in the area of defence manufacturing.