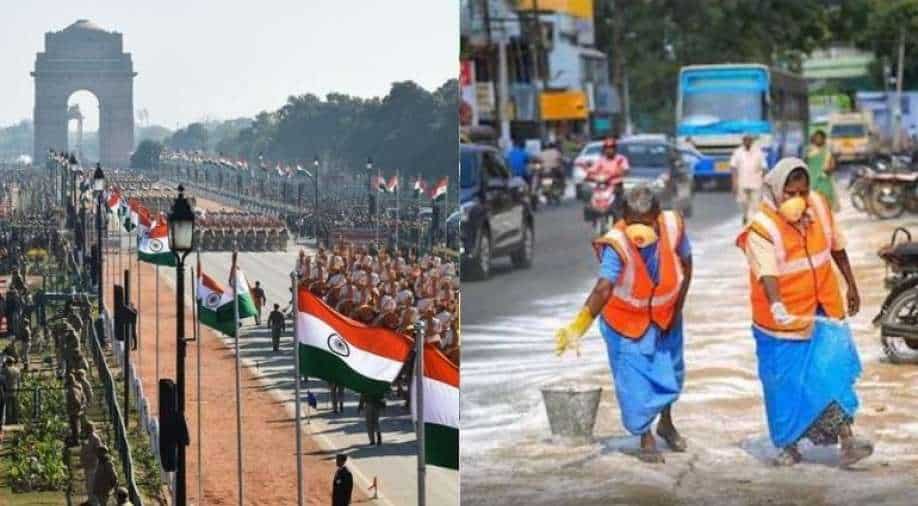 Republic Day has been celebrated every year in India on January 26, since 1950 to honour the date on which the Constitution of India came into effect. Photograph:( Twitter )

This year's Republic Day celebrations at Rajpath have been open to individuals from all walks of life.

The Indian government has made a ground-breaking decision. For the first time, autorickshaw drivers, construction employees, sanitation workers, and frontline workers have been invited to Republic Day celebrations.

According to a senior Ministry of Defense official, a special effort has been made to provide opportunities to those who have never seen the Republic Day event.

This year's Republic Day celebrations at Rajpath have been open to individuals from all walks of life.

The number of visitors is expected to be significantly reduced this year because to COVID-19 restrictions.

He noted that 25,000 people attended the event last year.

For the safety of visitors, only double-vaccinated invitees are allowed. And in the enclosures, they request guests to maintain a six-foot distance, wear masks and follow other COVID-19 protocols. All guests will be thermally screened, and medical support will be available in case of closure, he added.

Also Read: For second year in row, no chief guest on Republic day due to COVID-19 crisis

"We will telecast the Republic Day celebrations on the internet, television and other social media platforms for all viewers," he said.

We are encouraging people to be a part of the celebration from home, " he added.

For guests to get a better view of the live acts at the event, ten giant LED screens have been constructed on either side of the Rajpath.

"The celebration will begin at 10.30am, which is 30 minutes late from its scheduled time. The delay has been made to ensure better visibility during flypast performances, " he said.

Before the parade begins, a band of Central Armed Police Forces will perform to build an atmosphere of patriotism.

A total of 75 aircraft will participate in the flypast this year to mark 75 years of Independence. For the first time, visitors will get a glimpse of some unseen visuals from the cockpits of fighter planes performing manoeuvres on Republic Day, "he said. Tableaus of 12 states and the Union Territories and nine ministries will participate in the event.

The requests from West Bengal and Tamil Nadu to reconsider the inclusion of their tableaux in the Republic Day parade can not be revisited. They have been informed about the reasons for their non-inclusion), said senior defence ministry officials.

"We request guests to show the card in a flower pot or in the garden after the event. It contains seeds of Ashwagandha, alovera, and amla," he added.

Earlier, colleges or schools used to perform a cultural dance during the event but this year a nationwide competition was held to encourage more artists to participate in the event.

"We held ‘Bande Bharatam’ competition by Ministry of Defence and Ministry of Culture. At the districts level total of 3870 artists participated and after state, zonal and national competition, finally, 600 artists were selected who will perform at Rajpath on Republic Day," he added.

The Rajpath that has been redeveloped under Central Vista has been opened between Vijay Chowk and India Gate for Republic Day celebration.