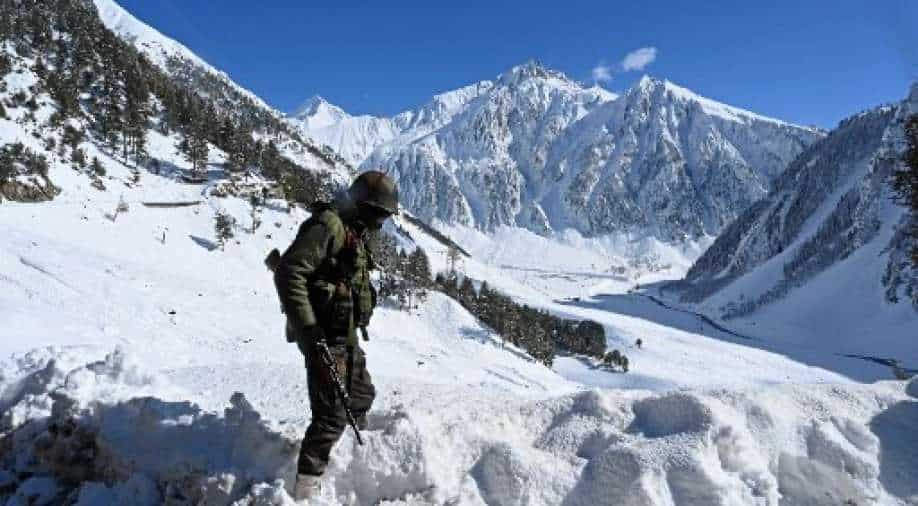 The Indian soldiers have been specially trained to tackle the harsh weather conditions at a height of nearly 10,000 feet above sea level with low oxygen levels.

Indian army soldiers have been braving cold wave conditions along the Line of Control(LoC) in north Kashmir with 5-10 feet of snow and temperatures plunging from minus 5 to minus 20 degrees in the area.

However, the soldiers remain alert in their task while guarding India's borders round the clock.

Indian army soldiers have been guarding the LoC and International Borders(IB) in J&K despite harsh weather conditions and hilly terrain.

The soldiers have been specially trained to tackle the harsh weather conditions at a height of nearly 10,000 feet above sea level with low oxygen levels.

However, the morale of the soldiers ensures that India's borders are fully secure and no infiltration is allowed to take place.

The soldiers are trained to work in snow-bound areas with avalanches being one of the biggest challenges faced by the men along the LoC.

The Indian army not only works as an avalanche rescue team for soldiers but also for civilians in the area. The soldiers have been provided with high-tech equipment which includes trackers and uniforms to tackle the extreme condictions at the border with Pakistan.

After the ceasefire agreement between India and Pakistan last year, the situation along the LoC has been better as compared to earlier, however, the Indian army cannot afford to let down its guard.

The Indian soldiers guard the borders day and night along the LoC even as the number of infiltrations has come down by more than 80 per cent due to their unrelenting vigil.

The quick response teams on LoC keep an eye on every nook and cranny of the border in order to trap any infiltrator seeking to cross the border.

Amid the bitter winter, the Indian army has made rapid strides in using high-tech gadgets, surveillance drones, night vigil cameras, thermal imaging tracers and other similar gear. The army has also been provided with snow scooters to reach areas quickly near the LoC.