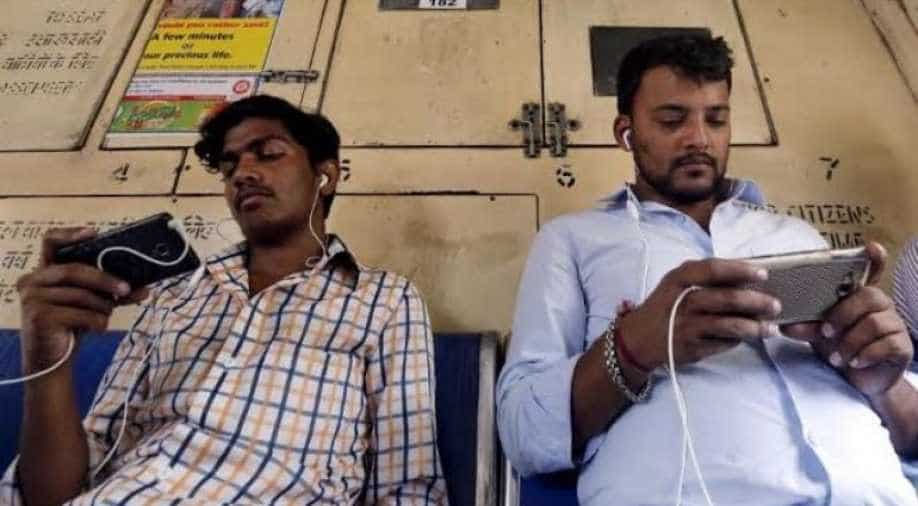 Commuters watch videos on their mobile phones as they travel in a suburban train in Mumbai. Photograph:( Reuters )

The average daily time spent by Indians online is likely to increase from 1 hour 20 minutes in 2017 to 2 hours 21 minutes by next year.

Online video content is a new addiction for Indians. An average viewer is now watching the online content about eight hours 28 minutes each week, more than the time they spend viewing TV every week, according to a survey.

Many users get hooked to Youtube and digital videos to the extent that they spend hours in a day consuming content it has to offer.

Be it checking the schedule of your bus or train. To the weather and the news.All create a dependency on digital media which further fuels smartphone addiction.

So when it comes to internet adoption trends - many reports say that India is growing as one of the leading markets in the world.

An e-marketer forecast has revealed that India is likely to overtake the US in terms of time spent on digital videos by the year 2020.

A major contributor to this trend - is the rise of short digital videos.

The report says that the average daily time spent by Indians online is likely to increase from 1 hour 20 minutes in 2017 to 2 hours 21 minutes by next year.

Not just this - India consumes the highest data per user and subscriber in the world.

The telecom regulatory authority of India has estimated this to be around 7.69 gigabytes per month.

Now almost all of this is happening due to access to cheap android smartphones and 4G cellular data.

But it certainly has some advantages to it.There is no doubt that the usage of digital videos is exploding in India.

According to reports, nearly 70 per cent of online viewers resort to youtube to learn something.

Digital videos have also become an important source for consuming news. From trailers to movie clips to song launches, social media has become an indispensable part of the Indian film industry.

Social media's journey has not only been deeply linked to the internet growth story of India but also to video consumption habits of Indians.