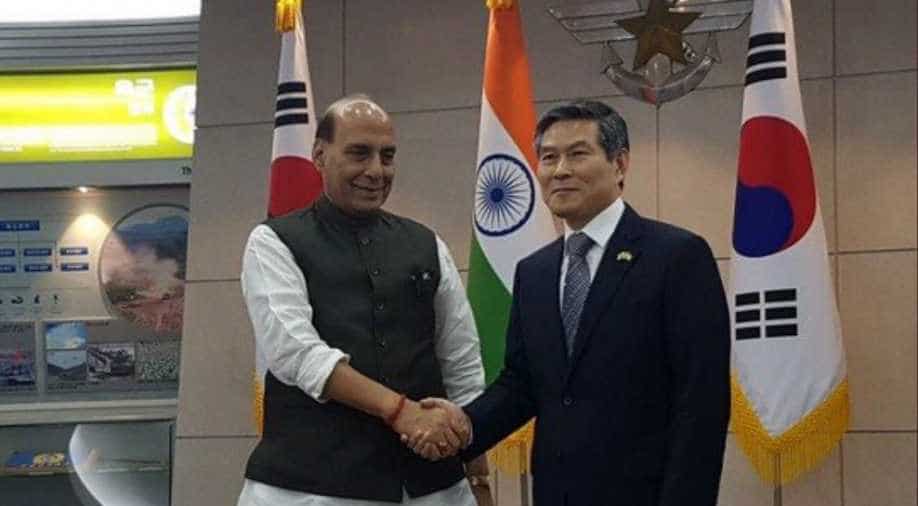 India and South Korea on Friday signed two Memoranda of Understanding (MoUs) in the presence of Union Defence Minister Rajnath Singh and his counterpart with an aim to intensify defence cooperation between the two countries.

"The ministers exchanged views on regional and international developments of mutual interest. Two MoUs to further defence educational exchanges and extend logistical support to each other's navies were signed. These agreements will help enhance defence cooperation between India-Republic of Korea," the Office of Raksha Mantri (Ministry of Defence) tweeted.

Earlier in the day, the Defence Minister held bilateral talks with his South Korean counterpart Jeong Kyeong-Doo where they reviewed defence cooperation between both countries.

During the meeting, both sides agreed that there was great potential to further boost defence ties.

"The Ministers noted that defence cooperation lies at the heart of the special strategic partnership between India and the ROK. They discussed the ongoing cooperation at Service to Service level and prospects for enhanced cooperation between India and Korea defence industries," the Ministry added.Singh is currently on a three-day visit to South Korea since Wednesday with an aim to intensify bilateral defence and security relations.

India is developing strong military hardware cooperation with South Korea as the Indian Army has already inducted the K-9 Vajra self-propelled howitzers (which has roots in South Korea's K-9 Thunder) built in partnership with the Indian firm Larsen and Toubro.