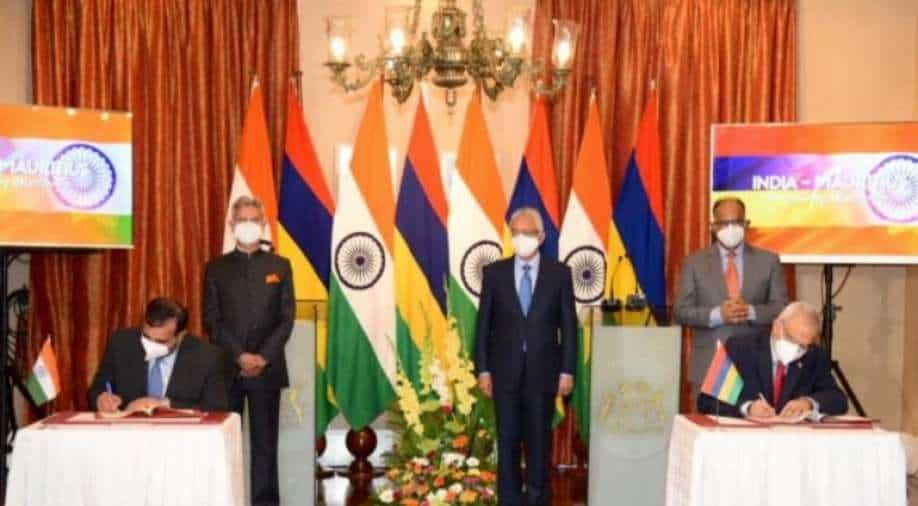 In a major development, India signed a free trade agreement (FTA) with Mauritius during External Affairs minister Dr S Jaishankar's visit to the country. The FTA or CECPA is the first such pact with any African country and is being considered a milestone in commercial ties.

External affairs minister, standing alongside Mauritius PM Pravind Jugnauth said, "India is privileged to have entered into a Comprehensive Economic Cooperation and Partnership Agreement (CECPA) with Mauritius. It will provide a timely boost for the revival of our post-Covid economies and also enable Indian investors to use Mauritius as a launch-pad for business expansion into continental Africa helping the prospect of Mauritius emerging as a ‘hub of Africa’."

The CECPA provides preferential access to Mauritius for the bulk of the trade. These include frozen fish, speciality sugar, biscuits, fresh fruits, juices, mineral water, soaps, bags, medical and surgical equipment, and apparel. One of the key immediate impacts is that Mauritius will get preferential access for the export of 40,000 tonnes of sugar into India and also access for the export of 7.5 million pieces of apparel.

Also Read: India says committed to no first use of nukes, supports negotiations on FMCT

With an aim to make Mauritius a 'strategic economic regional hub', PM Pravind Jugnauth said," CECPA is first of its kind signed by India with an African country. This landmark agreement is far-reaching and will unleash new and expanded opportunities in trade, goods and services...CECPA will encourage Indian entrepreneurs to invest both in Mauritius and across the whole region."

Other than FTA, both countries increased defence engagement with India extending a defence line of credit (LOC) of $100 million to the Indian Ocean Island country. An agreement has also been signed on providing for a Dornier aircraft and an Advanced Light Helicopter Dhruv on lease to Mauritius on a gratis basis for two years. This will help in the country's capabilities to patrol and monitor its vast maritime domain more effectively.

PM Jugnauth said, "ensuring peace and respect for rule of law in the Indo Pacific region" was discussed with EAM. Adding, "I welcome the renewed commitment of the Quad countries in upholding rules-based international order underpinned by respect for territorial integrity and sovereignty, rule of law, transparency, freedom of navigation in international water and peaceful resolution of disputes. Adherence to these principles is crucial."

MoU on Consumer Protection and Contract for 8 MW solar plant was also signed. India gave 100,000 doses of Covid vaccines to the country. This is the second such covid vaccine consignment of 100,000 doses being given by India. Mauritius has also requested further 200,000 doses of vaccines.

Interestingly, with both Mauritius and Maldives, India has increased its defence partnership. Over the weekend, India and Maldives signed a pact to 'develop, support and maintain' a Maldives National Defence Force Coast Guard Harbour at Sifvaru (Uthuru Thilafalhu) and extended $50 million LOC in Defence.