India proved every cynic wrong with its swift action against COVID-19: Priyam Gandhi-Mody 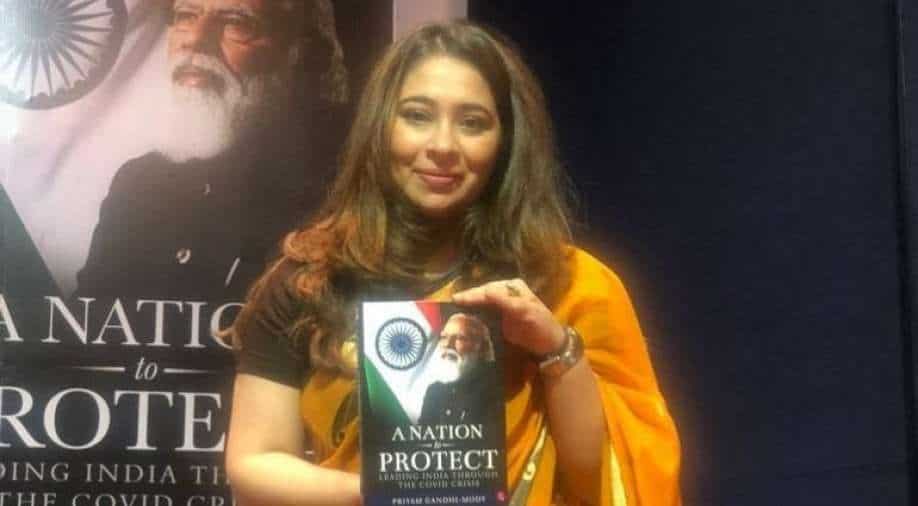 Priyam Gandhi-Mody, with her book 'A Nation to Protect'. Photograph:( WION )

Priyam Gandhi-Mody, in her book 'A Nation to Protect: Leading India through the COVID Crisis', provides a definitive account of how India emerged from the deadly crisis under the strong leadership of PM Modi.

When the COVID-19 pandemic struck India in early 2020, global experts predicted that the second most populous country in the world would face a tsunami of cases.

Everyone had written off India, saying that its "weak health infrastructure" wouldn’t be able to cater to the huge masses.

But India, under the able leadership of Prime Minister Narendra Modi, proved every doomsday prediction wrong with its effective response to the rising challenge.

Be it the oxygen cylinder crisis or the shortage of essential medicines due to the unavailability of active pharmaceutical ingredients (API) from China, India rose to every occasion and dealt with each problem with its swift decision making.

Priyam Gandhi-Mody, in her book 'A Nation to Protect: Leading India through the COVID Crisis', provides a definitive account of  how India emerged from the deadly crisis under the strong leadership of PM Modi.

In an interview with WION, she talked about her experience and what motivated her to write the book.

WION: How did this book happen? What was your biggest motivation to write it?

Priyam Gandhi-Mody: When COVID-19 had spread to several parts of the world, India was pegged to be the next hotspot with doomsday predictions to the tune of dead bodies piling up on the streets. Some even said that because of India, the global fight against the virus will take a few steps back. It was no secret that due to decades of negligence, we had inherited a weak health infrastructure and lacked almost all the tools which any nation would need to fight a global pandemic. But as time went on, the Prime Minister led the country from the front and citizens, bureaucrats, and leaders lined up to follow his directives.

India’s response began to strengthen, taking us to a point where we can confidently say that we have managed the response far better than most wealthier nations who were far better equipped. This ‘India story’ needed to be told.

WION: In your words, can you describe how was India's Covid response different from other countries?

Priyam Gandhi-Mody: Decisive leadership by the prime minister. His insistence on involving states, all chief ministers and ‘all of government’ approach is what set us apart.

When he made decisions, he never went back on them, never flip-flopped and kept a direct channel of communication with the people open, building trust.

WION: Can you share something about the writing process and how long did it take you to compile this work?

Priyam Gandhi-Mody: For about six months I have been speaking to various people who have led the country’s response, from the government to private folks, experts and industry leaders. I have tried to include all those opinions and responses to strengthen the story.

WION: Your thoughts on the Indian government's collaboration with private organisations to combat COVID-19

Priyam Gandhi-Mody:  If it wasn’t for extensive effort on this collaboration we would still be relying on other nations for our essentials – masks, tests, PPE kits, ventilators and vaccines. This pandemic has shown us the value of ‘aatmanirbharta’ (self-reliant) and how it can bring us independence, security and strength.

WION: Your thoughts on India's vaccination drive compared to other countries

Priyam Gandhi-Mody: The backbone of our vaccination drive has been our COWIN platform, which has ensured equality, appropriate mobilization of vials and meticulous management of the administration. While western nations were issuing flimsy paper pieces for proof of vaccination, we were issuing a QR coded, fool-proof certificate on the mobile phone.

GoI operated with the knowledge that our vaccine supply was going to be back-loaded, meaning our suppliers would be providing a significantly large amount of doses in the second half of 2021. This is why, we secured our most vulnerable populations first. In fact, even the Prime Minister waited his turn to get vaccinated, pumping in discipline into the effort.

WION: Having worked closely with PM Modi, can you tell us a bit about your interactions with him?

Priyam Gandhi-Mody: Just like most other people, I had made certain assumptions about him because of how sections of the media portray him – authoritarian, someone who makes unilateral decisions, intimidating etc. However, all those were quickly shattered when I saw that he is as much human as all of us – replete with the same emotions.

His answers were detailed, eye-opening and certainly played a huge part in putting the entire information that everyone else was giving me in context.

WION: What are your future plans? Any new book we should look forward to?

Priyam Gandhi-Mody: There are a bunch of things in the pipeline but we’ll see where they go. Too early to speak about them at this point.