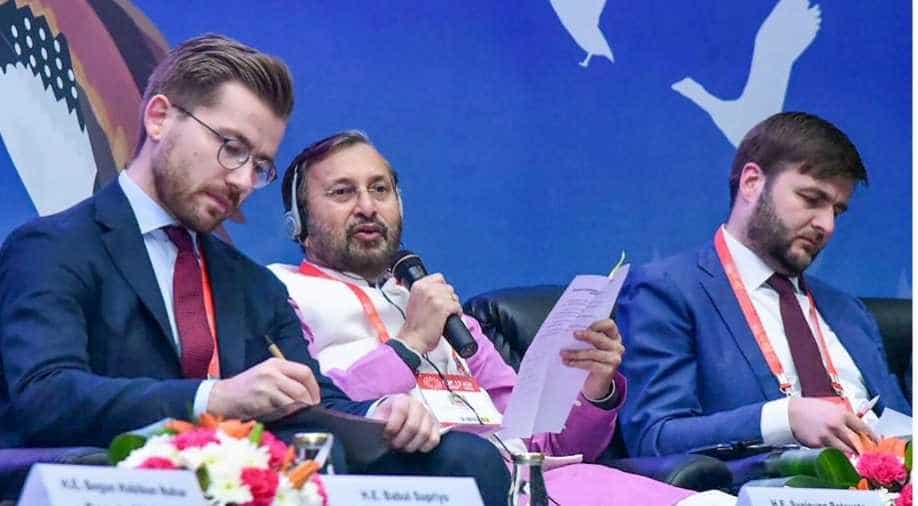 Both countries assured that they are committed to supporting global action to address plastic pollution and exploring the feasibility of establishing a new global agreement on plastic pollution.

Javadekar, who was addressing a press conference here along with his Norwegian counterpart Sveinung Rotevan on the side-lines of a United Nation summit biodiversity conservation, emphasised for a shared understanding of the global problem, which cannot be solved by any one country alone.

Javadekar said, "'Say No to plastic' has been an action initiated by Prime Minister Narendra Modi. India produces 20,000 tons of plastic out of which 15,000 tons is collected. However, the remaining 5,000 to 6,000 tons remain in the water bodies. India-Norway cooperation can move ahead in this arena."

Both countries assured that they are committed to supporting global action to address plastic pollution and exploring the feasibility of establishing a new global agreement on plastic pollution.

In addition, the two sides expressed interest to continue and strengthen the mutually beneficial cooperation on the environment and climate between the two countries, including on ocean affairs.

Last year, a Memorandum of Understanding (MoU) was signed between India and Norway on `India-Norway Ocean Dialogue` apart from an establishment of a joint task force on the blue economy.

According to the agreement, the ocean, if managed properly, holds the key to meeting many of the sustainable development goals. Integrated ocean management is central to achieving a sustainable blue economy.

Reiterating the importance of a joint effort towards the protection of the environment, Rotevatn said, "India and Norway have long-standing and good cooperation. Our two countries shared experiences in environment management. Norway sees India as an important player in the environment. Today we had a productive meeting."

India is marking the beginning of a super year of Biodiversity with the hosting of the 13th Conference of Parties (COP) of the Convention on the Conservation of Migratory Species of Wild Animals (CMS), an environmental treaty under the aegis of United Nations Environment Programme, from February 17-22, 2020 at Gandhinagar in Gujarat.

The Opening Ceremony and Plenary session of the COP will be followed by side events and working group meetings until the closing ceremony.

Prime Minister Narendra Modi will inaugurate the COP 13 via video conferencing. Numerous national and international organisations will showcase best practices in wildlife conservation during the course of the conference.

Representatives from 130 Parties and eminent conservationists and international NGOs working in the field of wildlife conservation will attend the UN summit.