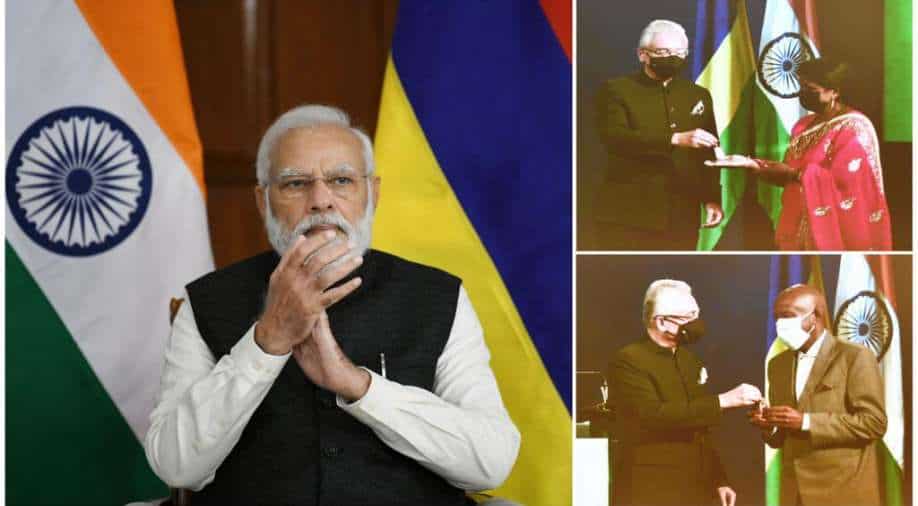 PM Modi highlighted that he is 'particularly glad to be associated with this important effort to provide affordable houses to the common people of Mauritius'.

Emphasising on deep links between India and Mauritius, Prime Minister Narendra Modi on Thursday said that both countries are "united by history, ancestry, culture, language and the shared waters of the Indian Ocean."

The Indian prime minister made the comments at a virtual event alongside Mauritius PM Pravind Kumar Jugnauth in which a slew of India-assisted projects were inaugurated.

The project comprising of 956 housing units with associated infrastructure such as sewerage treatment plant, leeching field, playgrounds is implemented at two locations  - Dagotiere (600 units) and Mare Tabac (356 units). It is one of the five high-profile infrastructure projects identified for implementation under the $353 million Special Economic Package (SEP) extended to Mauritius in 2016.

PM Modi highlighted that he is "particularly glad to be associated with this important effort to provide affordable houses to the common people of Mauritius".

India also initiated two other "nation building" projects including the state-of-the-art civil service college that will help in skilling government officers and the eight megawatt solar PV farm project which will help mitigate the climate challenges that Mauritius faces as an island country.

PM also pointed to cooperation in the maritime security domain, saying, "despite the constraints of COVID-19, we were able to hand over a Dornier aircraft on lease and complete the Short Refit of the Mauritian Coast Guard ship Barracuda".

India also deployed equipment and experts to contain the Wakashio oil spill which PM said "was another example of our cooperation to protect our shared maritime heritage."

Two MoUs were also exchanged during Thursday's event. One regarding Indian grant assistance for the implementation of small development projects, another a $190 million line of credit between export import bank of India (EXIM) and SBM (Mauritius) Infrastructure Development Company Ltd for the ongoing metro express project and other infrastructure projects.

In 2019, both PMs had jointly inaugurated the Metro express project and the New ENT hospital in Mauritius in virtual mode. Likewise, in July 2020, the new Supreme Court building of Mauritius was also inaugurated virtually by the two Prime Ministers.