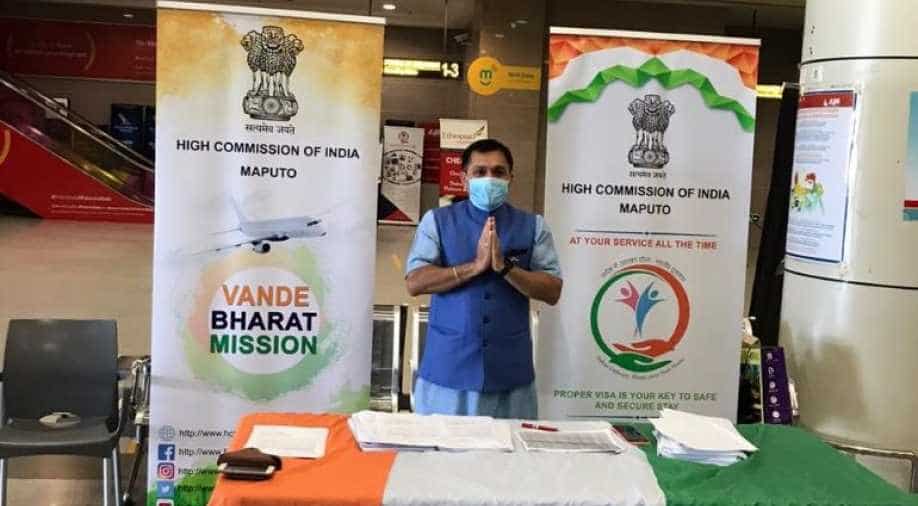 We are providing several medicines by the end of June or early July. As far as the debt situation of the country is concerned, Mozambique has 100% of the debt of GDP which is huge.

In a bid to help Mozambique, a country in East Africa financially amidst COVID crisis, India has suspended debt repayment on $700 million concessional loans to the country till the end of this year, Indian envoy to the country has told WION.

Speaking to our Principal Diplomatic Correspondent Sidhant Sibal from capital Maputo, Indian envoy Rajeev Kumar said, "We have agreed to provide this relief to all the LCD countries who are going through debt stress due to the economic impact of the virus."

He also talked about how India is providing medicines to the country and also reaching out to stranded Indian nationals for repatriation.

WION: How are India and Mozambique working together to combat the crisis?
Rajeev Kumar: As far as the bilateral relationships between India and Mozambique are concerned, particularly in this pandemic time, I should tell you, being the pharmacy of the world, our PM Modi has taken a great initiative of providing a healing touch to every country, every continent on the planet by offering medicines all around the world. We always believe in providing solutions to global problems and cure to the disease. This pandemic is no different.

On 3rd June, PM Modi called President of Mozambique to offer our assistance in the fight against COVID. Mozambique will soon be receiving medicines from India in the fight against the virus, some of the medicines are HCQ and azithromycin. The second offer as part of our g20 commitments is debt relief by the suspension to Mozambique. We have agreed to provide this relief to all the LCD countries who are going through debt stress due to the economic impact of the virus. These are two economic steps govt of India has taken to provide assistance to Mozambique.

WION: How have we helped in Medicines and also debt suspension?
Rajeev Kumar: As far HCQ is concerned, we have agreed and will provide 100,000 tablets to the country. We are providing several medicines by the end of June or early July. As far as the debt situation of the country is concerned, Mozambique has 100% of the debt of GDP which is huge.

The country also had two very bad cyclones in the month of March and April 2019. We were the first responders then by providing relief to the people. IMF, in October 2019, did a study and forecasted a GDP growth of 6 per cent but because of the pandemic, IMF has downgraded the forecast to 2.2 per cent. With this kind of public debt level and lower economic growth, and various other factors like lack of investment from abroad, that will create a situation in which the government here might not have space for the fiscal and monetary area.

This debt suspension by India will give them space to operate and provide cure or solutions to the larger population to meet the needs during a crisis. Example, a month back the government here had promised to increase the budget for the health sector by 0.1 per cent. Earlier it was 0.2per cent of GDP, now they will spend 0.3 per cent of GDP on the health.

They will require funds and relief will help achieve that promise. Loans are not commercial loans by India but concessional loans by EXIM bank of India. The loan has been of the tune of $700 million for infrastructure projects and has been helping in the country's growth path. On account of concessional loans, they have debt service commitments, so on those commitments, we have agreed to give suspension till the end of this year--31st Dec 2020 and they to pay the obligations. This will help them fight COVID crisis.

WION: How have you be helping when it comes to stranded Indians in the country?
Rajeev Kumar: The first COVID case was reported in capital Maputo on March 23 and the total number of cases stands at 662 cases and 4 deaths. The number of deaths is low. The maximum number of cases was on June 6 -- 55 cases total. Out of 662, 175 have recovered so far. We have 487 active cases.

In the month of April, two Indians have also got infected by COVID but have fully recovered. The country has done 22,000 tests so far.

In the ranking of the COVID cases, Mozambique has been placed at 39 positions. The situation is not that bad, with 0.1 death per million but this month it has been increasing. As far as Indians are concerned, we have a large number of the Indian community here, close to 3000 Indians, passport holders.

Ever since the first case was reported, the high commission has reached out. They told us the visas were expiring and we spoke to authorities and they have agreed to extend them. Authorities have extended visa till June 30 and Indians have a legal document to stay in the country. We would like to thank the President and the Financial Minister for taking care of Indians stranded the country.

We created a helpline on March 23 with three officers dedicated. We have received a number of calls. GOI has started a help desk - a WhatsApp number. On March 30, the government of Mozambique imposed a state of emergency for a month; we created an online platform for Indians to register themselves.

Till date, 2,856 and 144 Indians have required for repatriation. As soon as we received a direction from Delhi that flights can go to India, we initiated a proposal to have a charted flight from Maputo to India for 144 stranded Indians. The Indians community is very dynamic, very supportive and with their support like from Indian cultural association, charted flight will take 100 passengers from Maputo to Mumbai. The 100 passengers are not only Indian but one was also Bhutanese. Five Indians coming came from neighbouring countries.

WION: How has the Indian community helping out in efforts?
Rajeev Kumar: For me, the Indian community is the most important card in my ambassadorial toolbox. My last posting was in Senegal till August 2019, they were the one behind many positive outcomes. Here also in Mozambique, I can proudly tell u, Malayalee association helped 500 Bihari migrant labourers in March with food and provision. When they wanted to leave Kerala for Bihar, one individual who lives here in Maputo, Ms Vidya Vilas, contacted Kerala government to take care of them for more than a month.

Indian community provides us with help and when we saw first COVID cases here, I created a WhatsApp group to seek advice. The general manager of the best hotel here is an Indian offered Indians to stay here for free. Another Indian offered his hospital here. This gives you confidence, particularly during a crisis. I might be HC, but they are the real HC. All Indians have come together. Community is providing money and organising everything. I thank them for the help and support. They are the real envoys of India.