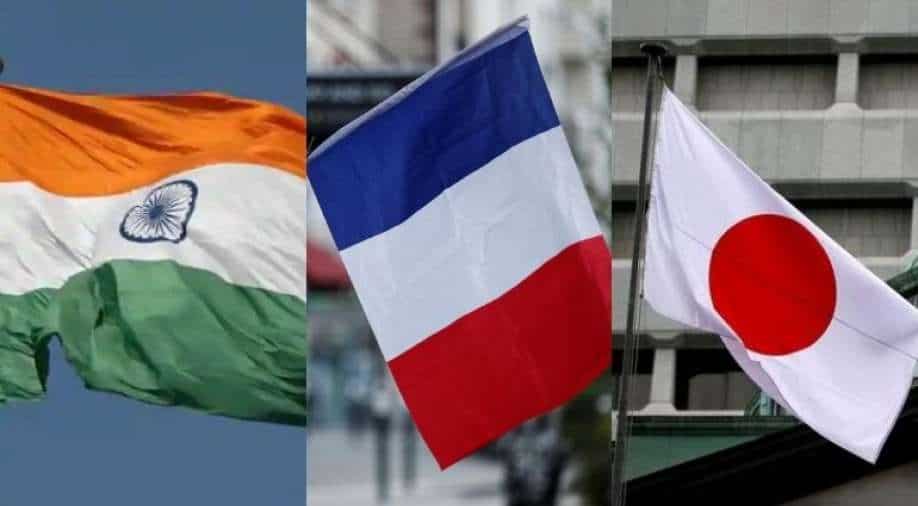 'We are building piece by piece a strategic triangle between Paris, Tokyo and Delhi committed to a rules-based Indo-Pacific order,' French envoy Emmanuel Lenain said

In growing convergences between India, France and Japan's "strategic triangle", all three countries have strongly backed the Indo-Pacific vision which has increasingly gained currency within democratic nations of the region and around the world.

Speaking at a virtual event, India's foreign secretary Harsh Shringla said, "India, France and Japan are leading stakeholders in the region and with other like-minded countries, it is upon us to ensure that the Indo-Pacific remains peaceful and open, taking into account needs and concerns of all its inhabitants."

Geographically New Delhi sees the Indo-Pacific as a "seamless interface" of the Indian and Pacific ocean from the western coast of North America to the eastern shores of Africa. Over 50 per cent of global trade traverses this maritime domain which is also home to over 60 per cent of the world’s population and the global GDP.

Calling his country an "Indo-Pacific power" due to its territories in the region, French envoy Emmanuel Lenain said, "We are building piece by piece a strategic triangle between Paris, Tokyo and Delhi committed to a rules-based Indo-Pacific order."

France has its territories in the Pacific Ocean and the Southern Indian Ocean. It also has 8,000 military personnel based in the region. In 2018, the country published its Indo-Pacific strategy whose main objective was to promote a rules-based, multilateral regional order, free of any hegemony.

Japanese envoy Satoshi Suzuki who was also present in the event highlighted his country's "unwavering" commitment to the vision, pointing out that "free and open Indo-Pacific vision has been the core diplomatic concept that Japan stands on".

He cited the first foreign visit of the new Japanese PM Yoshihide Suga’s to Vietnam and Indonesia and hosting of Quad Foreign ministers meet last year as the testament to Tokyo's efforts.

It was in 2007, in Delhi, that the then Japanese PM Shinzo Abe had spoken about the emerging dynamics of the region that links Pacific and Indian ocean. Almost a decade later in 2016 in Kenya, Abe unveiled Japan’s “Indo-Pacific Vision”.