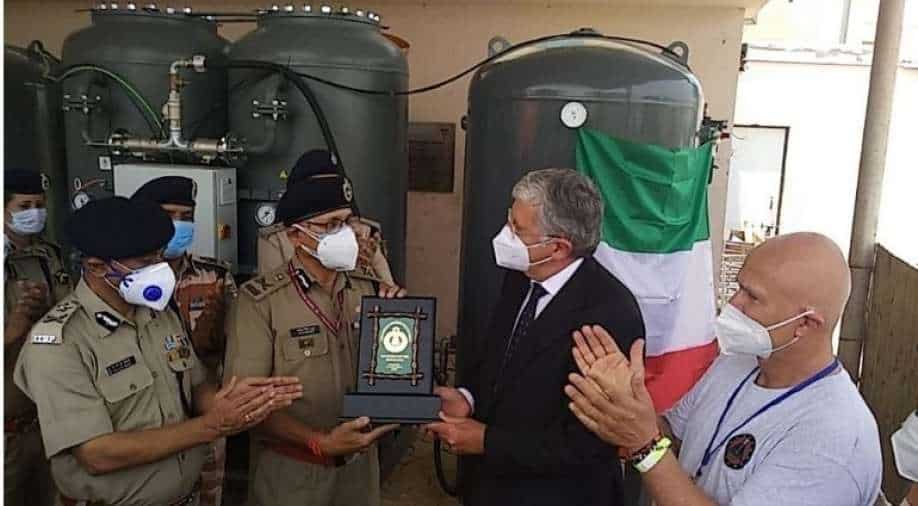 As international assistance pours into India, authorities have been able to deliver it to various end-users — hospitals spread across the country.

The top recipient of the assistance have been AIIMS (which is spread across the country), Safdarjung Delhi, Lady Harding, RML Hospital in Delhi, ITBP and DRDO.

The ministry of external affairs' covid cell is working 24*7 and contacting Indian missions and a mechanism (SOP) has been set up to smoothen the early delivery of assistance.

So far, 11,000 items of over 3,000 tonnes have been dispatched all over the country with the Indian Air force and Indian navy playing an important part in transporting material.

France had sent 200 syringe pumps, 500 machine filters, 500 anti-bacterial filters, 28 ventilators — all of which have been delivered to Lady Hardinge Medical College. Germany had sent 120 ventilators of which 40 were given to Safdarjung Hospital in Delhi, 45 to RML in Delhi, and 35 to AIIMS, Jhajjar.

One oxygen generation plant and 20 ventilators sent by Italy went to ITBP hospital, Noida. The plant that was installed within 48 hours was "switched on" by the Italian Ambassador to India Vincenzo de Luca himself. The plant will supply oxygen to more than 100 beds at a time to the COVID-19 patients admitted at the center.

New Zealand sent 72 oxygen concentrators, all of which went to army Base Hospital, Delhi Cantt.

Nearly 256 oxygen cylinders sent by Singapore were distributed to AIIMS Ranchi, Raipur, Patna, Lady Harding, with each getting 64 cylinders. Thailand had sent 30 Oxygen concentrators, with 15 going to Safdarjung, Delhi, 15 to CGHS, Delhi.

UAE's mega assistance went across the length and breadth of the country, such as the 1,707,600 masks were distributed to AIIMS Kalyani, Manglagiri, Rai Barelli, Jodhpur, Patna, Deogarh, Rishikesh, Delhi; 157 ventilators to DRDO Dehradun; ventilators to various AIIMS, DRDO, ITBP.

The West Asian country, with which New Delhi's partnership has grown in the past few years also sent 72,000 goggles, of which Safdarjung, Jodhpur and Lady Harding received 11,000 each, and RML and AIIMS Rishikesh received 10,000 each and Jhajjar received 20,000 each.

The Ministry of External Affairs' covid cell's chief Dammu Ravi has assured that the international assistance sent to India by various countries is being distributed to various locations in real-time to bring immediate relief as the covid crisis wreaks the country.

"Not even one consignment has remained at the airport or the seaport. They have been directly loaded at the airport to distribution location in real-time, it goes and gets distributed and given to that location for the right use, immediate use" Dammu Ravi, Additional Secretary of MEA's COVID Cell explained. "Most of the consignments have reached the destination. some may be in transit, for a logistical reason and every consignment is tracked and ensured that it is properly used in those locations"

Nearly 10,000 doses of Remdesivir that were given by Bangladesh will be given to North-Eastern states of Meghalaya, Manipur, Sikkim, Tripura, Arunachal Pradesh, Nagaland, Mizoram, Regional Institute of Medical Sciences and North Eastern Indira Gandhi Regional Institute of Health and Medical Sciences (NEIGRIHMS). They were formally handed over at the Petrapole border checkpoint between India and Bangladesh on May 05.

Belgium had also sent 9,000 vials of Remdesivir which have been delivered to the states of Maharashtra, Karnataka, Kerala, UP, Rajasthan. 20,000 doses of Favipiravir sent by Russia were sent to Lady Harding, Safdarjung, RLM, and AIIMS (Jodhpur, Rishikesh, Rai Barely, Delhi, Jhajjar).

The distribution of allocation that has been made is shared by foreign governments, both by Indian envoys abroad and MEA in Delhi, so that they are fully aware of how their donation is used by India. Ravi highlighted that "we are deeply appreciative of the generous offer coming from abroad, both by foreign governments, individuals, private entities, NGOs who have expressed solidarity and support with India" and "internationally recognition of the fact, that this crisis is not that of India alone, and it is a global crisis requiring collective actions and collective strategies"

This international assistance is coordinated with a cell at the health ministry, in which MEA plays an important role since all the goods come via them. The group meets every morning at around 9:30 am to coordinate the entire process. It comprises two senior officials from MEA, two joint secretaries from the health ministry, chief commissioner of customs, economic advisor from the ministry of civil aviation, a technical advisor from the directorate general of health services, secretary-general of Indian red cross, and a representative from HLL Lifecare Limited which is an Indian government-owned healthcare manufacturing company. The cell was set up on April 26 and on April 28, the process of delineation started.

India is receiving assistance from countries, NRI bodies, and the international private sector with the Indian red cross society being the single consignee for all the consignments coming from abroad. HLL is a customs clearing agent and the transported, which is assisted by the national disaster response force. The assistance is allocated on basis of accessibility and immediate use of resources to hospitals and states are given on basis of current active cases. In fact, a priority list of state and union territory is prepared.