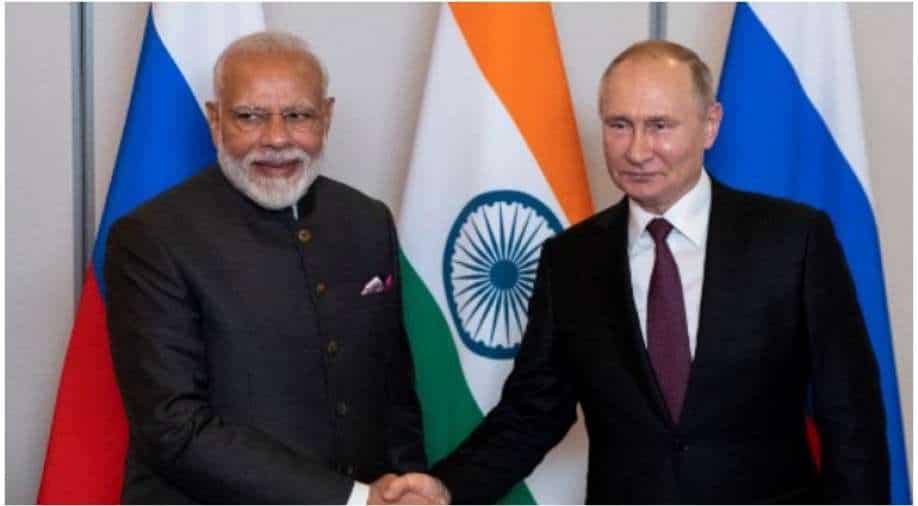 2+2 format dialogue between India and Russia would involve meet between defence and foreign ministers of both countries. File photo above shows  Russian President Vladimir Putin (R) and Indian Prime Minister Narendra Modi shaking hands during their meeting on the sidelines of the 11th edition of the BRICS Summit, in Brasilia, Brazil, on November 13, 2019 Photograph:( AFP )

India and Russia are due to hold first 2+2 format dialogue in New Delhi on December 6. Both countries are expected to discuss key bilateral, regional and international issues. Situation in the Indo-Pacific may be discussed as well. The inaugural meeting of the newly instituted 2 + 2 dialogue mechanism between both countries will be held at the level of the foreign and defence ministers.

"Both ministers are expected to discuss bilateral, regional and international political and defence issues within this format, as you know, we have with very few countries," The Ministry of External Affairs spokesperson Arindam Bagchi had said on Thursday.

He also informed that "the day (December 6) will begin with Defence Minister and his Russian counterpart, Sergey Shoygu, co-chairing what is known as the Intergovernmental Commission on Military-Technical Cooperation, in the morning."

Ministers of India and Russia are expected to hold detailed discussions over key regional and international topics. Developments in Afghanistan and Syria may also be discussed.

The ministers are expected to hold in-depth discussions of the key regional and international topics, including the situation in the Asia-Pacific region and developments in Afghanistan and Syria, as well as exchange views on interaction within the SCO and Russia, India and China (RIC), the Russian embassy had said in a statement on Friday.

"On December 6, Sergey Lavrov and Defence Minister Sergey Shoygu will meet with their Indian colleagues @DrSJaishankar and @rajnathsingh in New Delhi.  They will discuss key regional and international matters, including in the Asia-Pacific," the Ministry of Foreign Affairs of Russia had said in a tweet.

Bagchi had said that Russian President Vladimir Putin will arrive here on Monday for the 21st India-Russia Annual Summit.

This will be the first in-person meeting between Putin and Prime Minister Narendra Modi after their meeting on the sidelines of the BRICS summit in Brasilia in November 2019.