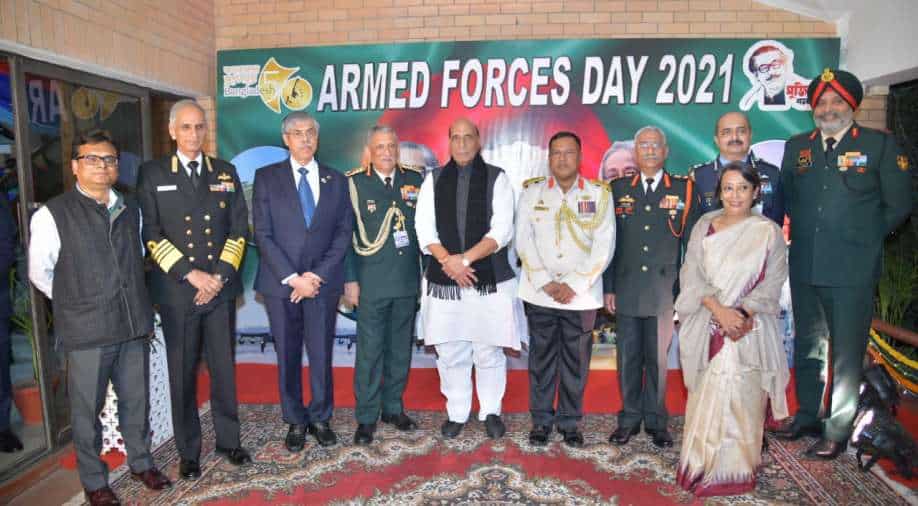 In a significant break from protocol, Indian Defence Minister Rajnath Singh on Monday visited the Bangladesh high commission in Delhi on the occasion of the Armed Forces Day of Bangladesh.

Bangladesh’s Armed Forces Day is observed every November 21. It was on this day in 1971 that the Battle of Garibpur began, in which Indian and Bangladeshi liberation forces came together against the Pakistani forces.

This year marks 50th anniversary of Bangladesh’s war of liberation that resulted in the emergence of the modern state of Bangladesh. The year is being celebrated both in India and Bangladesh.

Paying tributes to the “sacrifices made by the brave soldiers of the Indian Armed Forces, who stood steadfast with their Bangladeshi brothers and sisters”, the defence minister said, "The extraordinary leadership in India rose to the occasion against all odds and limitations in 1971, in support of a struggling nation fighting against the injustice and unspeakable atrocities perpetrated by the Pakistani Army."

The defence minister highlighted that “Indian Armed Forces and paramilitary forces worked together with the courageous Muktijoddhas (the fighters of the 1971 Bangladesh Liberation War) in their valiant struggle. In the course of the conflict, more than 1,650 brave Indian soldiers made the supreme sacrifice".

“I am glad that the cooperation between the Armed Forces of both countries is steadily progressing, by way of several activities - defence dialogue, staff talks, joint training, exercise and high-level exchanges. Defence cooperation between India and Bangladesh has increased with New Delhi extending USD 500 million Defence Line of Credit to further consolidate ties,” Singh said.