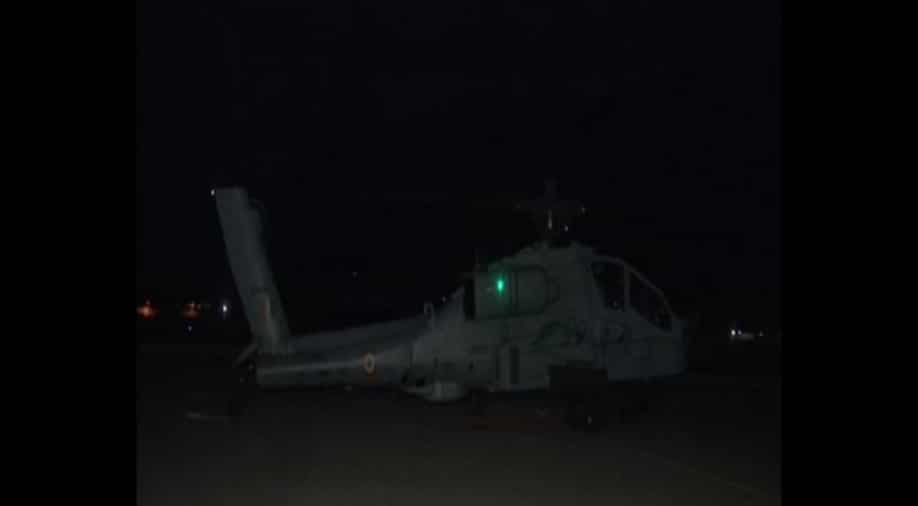 The entire base with its flurry of activities is playing a crucial role in enhancing the combat preparedness of the country along the China border. Photograph:( ANI )

Notwithstanding the strong winds and the chilling weather, the ground crew and pilots are flying using even very small windows when the wind speed is low, the report said.

The Indian Air Force (IAF) is carrying out intensive night operations over the Eastern Ladakh sector, involving its fighter aircraft including the MiG-29 and Sukhoi-30MKI along with its Apache attack helicopters and the Chinook heavy-lift helicopters, according to news agency ANI.

Notwithstanding the strong winds and the chilling weather, the ground crew and pilots are flying using even very small windows when the wind speed is low, the report said.

Explaining the significance of the operations, senior fighter pilot Group Captain A Rathi deployed at the forward base told ANI, "Night operations have an inherent element of surprise. Indian Air Force is fully trained and ready to undertake an entire spectrum of operations in any environment with the help of modern platforms and highly motivated personnel."

The pilots of the Apache choppers could be seen flying with their night vision goggles which allows them to navigate through the mountains around the airbase and the darkness in the night, the report added.

The strong late evening winds at the airbase and the weather warning almost led to calling off the night sorties but around 10 PM everyone was back to their respective aircraft as the wind speed receded. Soon after, the mighty Chinook choppers came out on the runway and hovered for some time adjusting to the wind speeds before taking off towards the eastern parts of Ladakh.

The Chinook with its high tech gadgets and navigation aids is fully ready for 24x7 operations and played a big role in transferring troops to the Line of Actual Control from rear locations.

''The motivation level of troops at the airbase is very high. The morale is very high like our motto Nabha Sparsham Deeptam (Touch the Sky with Glory)," Warrant Officer P Sharma told.

The entire base with its flurry of activities is playing a crucial role in enhancing the combat preparedness of the country along the China border.

"This base plays a very important role in undertaking operations in this area. It is cleared for all contingencies and all combat and support operations to be undertaken in this area," a Flight Lieutenant had told on the importance of the forward airfield.

The officer had stated that given the operations along the borders with China after the clash in Galwan valley and the tensions at the border, "Air Power will play an important role in this area in both combat and support roles. We have all the resources in terms of men and equipment to meet all the challenges."

"The Indian Air Force is ready in all aspects to undertake all operational talks and providing the requisite support for all military operations," the Wing Commander had added.

Air activities in the Ladakh area and other places along the China border had gone up extensively soon after the Chinese started building up and went up further after the Galwan valley clash on June 15 in which 20 Indian Army men lost their lives.