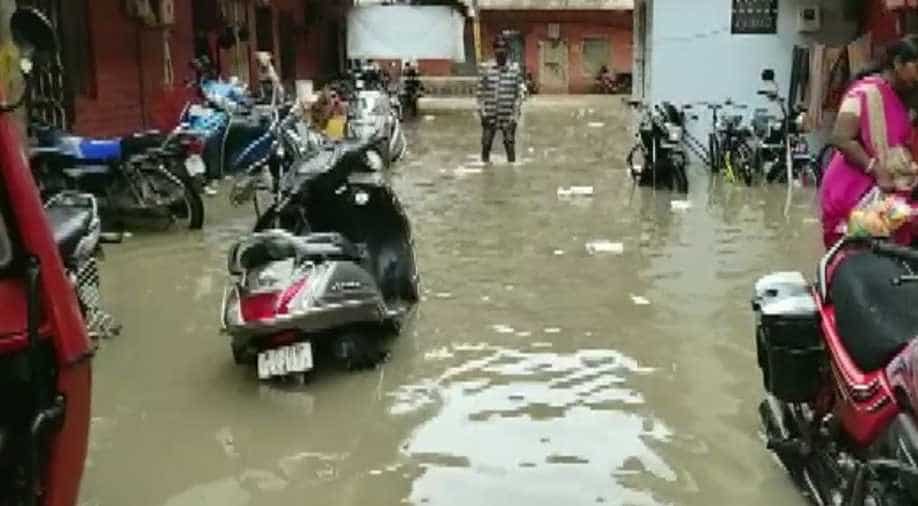 Various market areas in the region were also deluged in water and locals had to wade through knee-deep water.

Water-logging followed by incessant downpour has thrown the life of residents out of gear in Anand district, Khambat situated in Gujarat.

Due to heavy downpour, Anand district recorded 15 mm of rainfall within 10 hours on Saturday.

Several parts of the districts including Jahangirpur, Rabariwad, Sagar Society, Mochiwad and Baba Bajisha were inundated with water followed by massive rains.

Various market areas in the region were also deluged in water and locals had to wade through knee-deep water.

The district collector arrived at the waterlogged areas and directed the locals to vacate the affected areas.

Rains were so relentless that children in few areas had to struggle to wade through shoulder-deep water.

Meanwhile, Gujarat's Vadodara was massively hit by waterlogging and flood in several parts across the city, following a heavy downpour since last few days.

In a sigh of relief, District Magistrate Shalini Agarwal on Friday said that the floodwater which had entered Vadodara city is receding.

"Water level in Vishwamitri River is going down since today morning and the water is also receding from the cities. We have opened bridges for vehicular traffic. Electricity, water supply is being restored while health and cleanliness campaigns are being taken up," Agarwal told ANI.

Several people lost their lives after incessant rains in the region swelled the water level in the river causing it to burst into cities.

"There were four deaths due to wall collapse and two due to rainfall. National Disaster Relief Force (NDRF) and State Disaster Response Fund (SDRF) teams are deployed for evacuation," Agarwal added.

District Magistrate also mentioned that several crocodiles, which had ventured into the cities due to flood, were rescued.

Rescue and evacuation operations were undertaken on a large scale in the cities, in which several incidents of bravery came to light.One sub-inspector Govind Chawla risked his life to rescue a 1.5-year-old girl from the flood in Devipura area here on Thursday.

"The commissioner had ordered to evacuate people from low lying areas. We were in the area to rescue around 50 people who were stuck in floods. There I saw an infant. It was difficult as she could not hold me, so I carried her out of the water on my head using a plastic tub." Chawla said.