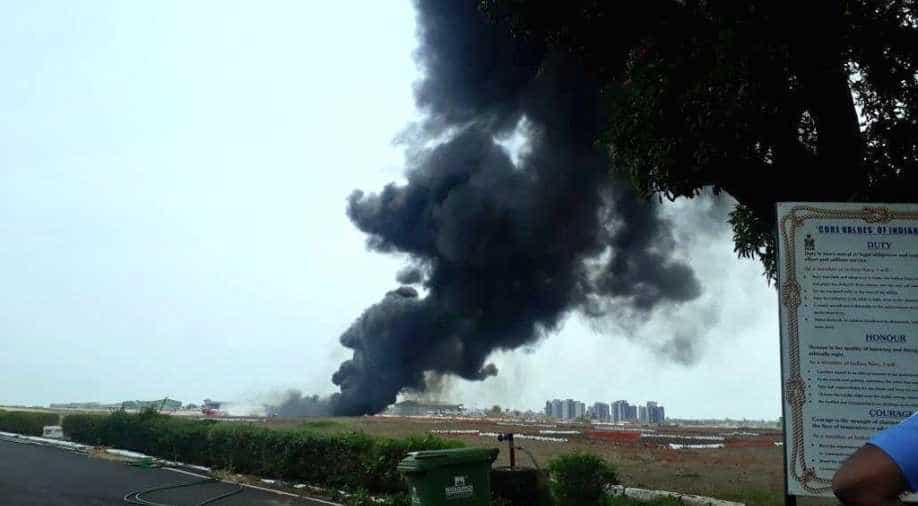 The images posted by the spokesperson showed thick smoke on the tarmac. Photograph:( ANI )

Earlier in the day the Navy Spokesperson said that efforts were underway to resume the flight services soon.

Flight operations at Goa`s Dabolim International Airport have resumed after it was temporarily suspended following a fuel tank attached to a MiG-29K aircraft fell on the runway while taking off on Saturday.

"Due to jettisoned fuel tank on runway during MIG sortie the operations are closed for two hrs at Goa airport. Pl bear with us," official Twitter handle of Goa International Airport tweeted earlier.

Earlier in the day the Navy Spokesperson said that efforts were underway to resume the flight services soon.

"Flash. #GoaAirport closed temporarily for a few hours view incident of fire caused by a drop tank of MiG 29K which got detached whilst taking off. All efforts in hand to resume flights ASAP. MiG 29K fighter ac is safe. @aaigoaairport @AAI_Official," the Navy put out a tweet informing about the incident.

The images posted by the spokesperson showed thick smoke on the tarmac.

As many as seven flights from different parts of the country, which were supposed to land at Goa airport, were diverted following the incident.

The Navy operates MiG-29Ks off the aircraft carrier INS Vikramaditya and the squadron is based at Naval air station, Goa.