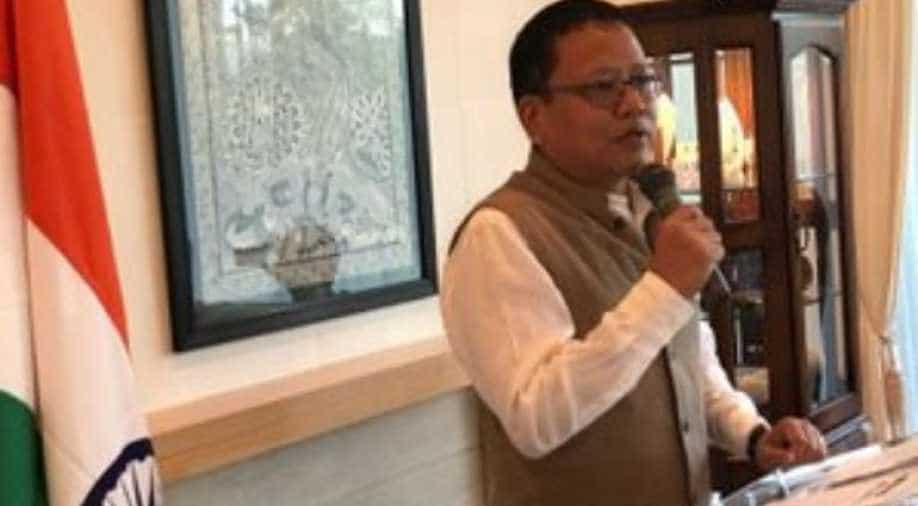 Speaking to our Principal Diplomatic Correspondent Sidhant Sibal from Iceland's capital Reykjavik, India's envoy to Iceland Armstrong Changsan spoke about how Iceland's deCODE Genetics and India's CSIR-IGIB are "examining ways and means to collaborate on scientific research on the pandemic."

Reaching out to Iceland despite the pan India lockdown, New Delhi was able to send its medicine consignment to country earning India lot of praise in the country. A commercial consignment of 50,000 packages of anti-malarial drug Chloroquine, sufficient to treat 25,000 patients were sent by India. Speaking to our Principal Diplomatic Correspondent Sidhant Sibal from Iceland's capital Reykjavik, India's envoy to Iceland Armstrong Changsan spoke about how Iceland's deCODE Genetics and India's CSIR-IGIB are "examining ways and means to collaborate on scientific research on the pandemic.". Armstrong also spoke about stranded Indians, which are about 10 in number and Indian mission the country is trying to make sure they reach to a destination in any Schengen country from where they can come to India.

WION: India-Iceland cooperation on the COVID-19 pandemic is two-fold.

T. Armstrong Changsan: At the initial stage, this mission along with Hq MEA helped clear a shipment of 50,000 chloroquine phosphate tablets that got stuck at the end of March due to our lockdown. This involved, movement from the factory in Uttarakhand to Delhi and then clarifications to Customs etc. The shipment finally reached Iceland on 6 April 2020. A few weeks later, we also shipped about 45 million paracetamol tablets to Iceland. Both of these were commercial transactions but nevertheless earned us much goodwill here. Their Permanent Secretary (Mr Sturla Sigurjonsson, who was their first HOM to India back in 2006) even wrote a thank you message.

Moving forward, the Icelandic biotech company deCODE Genetics and our CSIR-Institute of Genomics and Integrative Biology (CSIR-IGIB), New Delhi are examining ways and means to collaborate on scientific research on the pandemic.

In the middle of April last month, deCODE had published a paper in the New England Journal of Medicine, about the spread of the COVID pandemic in Iceland. Since the company is renowned for its studies on genetic risk factors and diseases, made possible due to deCODE’s an extensive database of the complete genealogy of Icelanders, going back 1000 years, as well as genetic details and medical records of half the Icelandic population, I had brought the paper to the attention of CSIR and ICMR, and they found it very impressive. Thereafter CSIR-IGIB was identified as the Indian research institute to collaborate with deCODE.

I am therefore very happy that even in this northernmost capital of the world, there is cutting edge research, and thus scope for our two countries to work together in tackling this pandemic. The small Icelandic population, with extensive genealogical records, and genetic data and health data being available, makes for an excellent testing lab, so to say, for perhaps finding out why COVID-19 disease manifests in so many ways: from asymptomatic, to mild, to severe, to fatal.

WION: How is the Indian mission reaching to stranded Indians in the country, if any? Any plans of repatriation? Any Indian infected with COVID.

T. Armstrong Changsan: Only about 10 Indians are stranded here in Iceland who wish to return to India, since they are tourists/some whose work permits are expiring soon. These numbers are rather small for a repatriation/evacuation flight and hence Mission is looking at ways and means of getting them to some other Schengen country from where they will catch the evacuation flight to their respective cities. The challenge here is that Iceland is virtually cut off with just about 3 known flights to Europe (Stockholm on 16 May, and London on 13 and 15 May) in the coming days. In other words, there is just 1 flight to a Schengen country since London requires a separate visa. These limited flights are there only due to the support of the Government of Iceland given to the near-bankrupt airline namely Icelandair. Government support is being extended on a weekly basis and it is unclear whether it will receive further support next week.

WION: How has the ground situation in Iceland changed, how have Indian diplomats faring?

T. Armstrong Changsan: Fortunately, none of the stranded Indians or Mission’s officials/staff are infected. The Iceland health authorities are ready to test the stranded Indians for the sake of COVID-free documentation before departure. In fact, as you might be aware, out of 1801 confirmed infections in Iceland, 1773 have recovered and there remain 18 persons with infections, with only 2 persons in hospital. 10 fatalities in all. In fact, only 3 cases of infection by the virus have been diagnosed in this month of May. Earlier today, 12 May, the government announced that it expects to start easing restrictions on international arrivals by 15 June 2020; and offer arriving persons the option to do virus testing on arrival and proceed normally without quarantine, or else, they would be required to home-quarantine for 2 weeks.

WION: Anything we can learn from Iceland's COVID containment model, even though it has a natural advantage of being a sparsely populated country.

T. Armstrong Changsan: Iceland’s containment model is based on what is already known which is large scale testing, tracing and isolation. But the surprising thing here is, about 63% of the tests were done on the general public; that is, random tests, and not the other way around. I think this is quite unique. Although, I am not an expert but there is something more which I would like to share here. It is do with Iceland’s healthcare system which has extensive digitisation of patient records, accessible across the country, across hospitals including private clinics. Prescriptions are also paperless and can be viewed by the pharmacist directly. Allows for remote healthcare, thus preventing a great deal of visits to and crowding at the hospitals, or even clogging hospital telephone lines, while at the same time enabling remote monitoring of sick persons and advising them. Iceland’s national patients portal (heilsuvera.is) is very interactive, and sends out alerts to doctors, nurses and the patient concerned once certain responses to questionnaires trigger certain parameters; it even has the facility for video conferencing with the doctor. This came through very effective in tackling the pandemic and allowing for better, wider and optimal use of the resources of doctors, nurses and other medical staff. Iceland's digitisation of its healthcare system is different from the European healthcare systems, which are perhaps like our big hospitals in which a lot of patient data, etc. is stored in individual hospital software (or even paper files), giving rise to challenges in accessibility at different locations across the country. And since this Icelandic system can be accessed even on a smartphone, perhaps we too could emulate and develop a similar healthcare system backbone in India. And thereby leapfrogging over to a new smartphone-based healthcare system, that allows for optimising the use of the limited number of our doctors and other healthcare professionals.