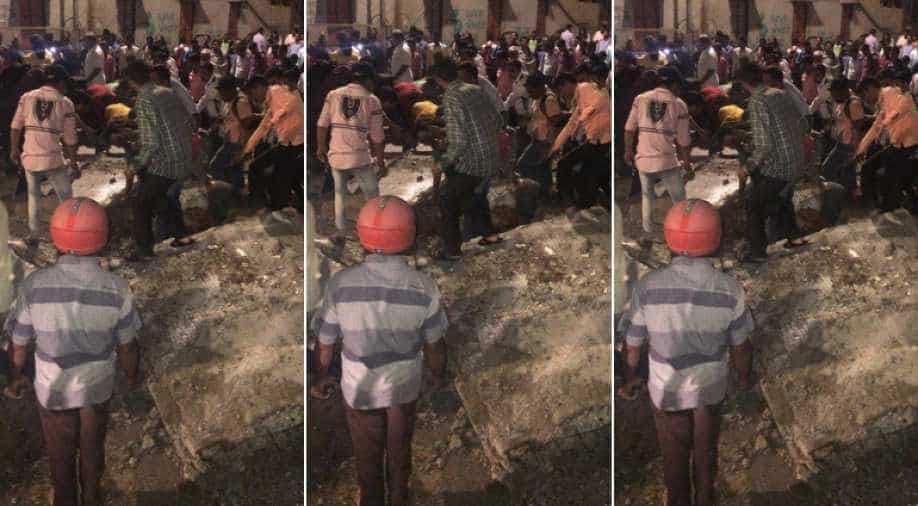 The National Disaster Response Force said people are thought to be trapped under the debris. Photograph:( ANI )

The bridge used to connect the railway station's platform no. 1 with BT Lane near the Times of India building.

Mumbai: A team of NDRF and dog squad also present at the spot where portion of a foot over bridge near CSMT railways station collapsed earlier this evening. 5 people have died, 36 injured. Toll is likely to rise. pic.twitter.com/KxR4uxQ7BC

Foot over bridge connecting CST platform 1 north end with B T Lane near Times of India building has collapsed. Injured persons are being shifted to hospitals. Traffic affected. Commuters to use alternate routes. Senior officers are on spot.

A picture from the accident site (see below) showed that a large section of the floor of the bridge had collapsed.

The National Disaster Response Force meanwhile said 10 to 12 people are thought to be trapped under the debris. They added that a team had been rushed to CST railway station.

A foot overbridge at another Mumbai railway station had collapsed in September 2017. That collapse, at Mumbai's Elphinstone Road railway station, had left 23 people dead.

Maharastra minister Vinod Tawde, who visited the accident site, said "a slab of the bridge had collapsed". He added that the "bridge wasn't in a bad condition". And that "it required minor repairs for which work was underway".

"Why was it not closed until the work was completed? It'll also be probed," he said.

Maharashtra Chief Minister Devendra Fadnavis said he had ordered a "high-level inquiry" into the collapse.

"A structural audit of the bridge had earlier been done and it was found to be fit. Even after that if such incident happened, it raises question on the audit. Inquiry will be done. Strictest action will be taken," he said.

Tawde meanwhile said an enquiry into the collapse would be conducted by the Railways and the BMC.

Raj Purohit, BJP MLA on portion of foot over bridge near CSMT Railway station collapse: It's unfortunate, it shouldn't have happened. Action should be taken against the engineer who gave certificate to this bridge in auditing, he should be arrested. He should be punished. #Mumbai pic.twitter.com/Qzx55j0j7s

Fadnavis said an ex-gratia payment of Rs 5 lakh would be made to the families of each of the dead, and Rs 50,000 to each of the injured. He added that the state government would provide for their treatment.

Mumbai: Mumbai mayor Vishwanath Mahadeshwar arrives at St George Hospital to meet the people who were injured in the incident where part of a foot over bridge near CSMT railway station collapsed earlier this evening. pic.twitter.com/RkZxquhL2Z

Prime Minister Narendra Modi meanwhile said he was "deeply anguished by the loss of lives".

Deeply anguished by the loss of lives due to the foot overbridge accident in Mumbai. My thoughts are with the bereaved families. Wishing that the injured recover at the earliest. The Maharashtra Government is providing all possible assistance to those affected.

"My thoughts are with the bereaved families. Wishing that the injured recover at the earliest. The Maharashtra Government is providing all possible assistance to those affected," he added.