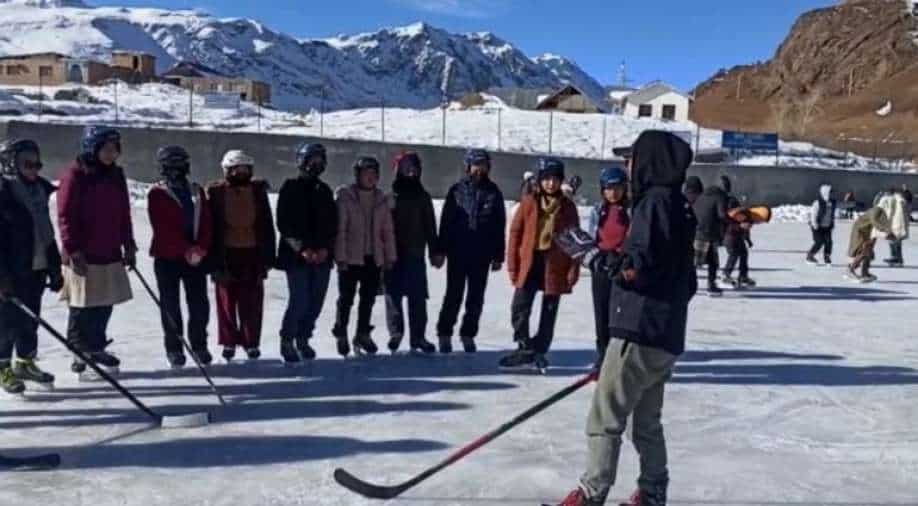 The temperatures in Ladakh at places like Drass have dipped to minus 19 degrees. While the people are facing several problems due to the cold, the youngsters are making use of these minus degrees.

The youngsters are playing Ice skating and Ice Hockey in naturally formed Ice rinks. The first Ice Hockey camp has been organized by Ladakh Women's Ice Hockey Foundation in Drass.

The main aim for this is preparing the women's team in Kargil and Drass areas. The Ice Hockey coaches are taking full advantage of the premature cold to prepare the team for the National Games for Ladakh.

"The hockey team that we have now has 30 girls out of which most of the girls are from Leh, that's why we have organized this camp in Drass, in which 15 out of the 40 girls involved should be selected for the Ladakh women's team'' said Noor Banu, General Secretary, and Ice Hockey Coach, Ladakh Women's Ice Hockey Foundation.

This is the first time a platform for girls of Kargil is being started to involve them in winter sports activities. So far, many male sportsmen have been involved in ice skating and ice hockey games have come out of places like Drass and Kargil.

A 15-day training camp was organized at the natural ice rink at Zanskar. A large number of women not only participated in this camp but also brought the dream of New Ladakh to come true.

''I am extremely happy to be here, Coach trains us so well. I want to tell other girls also to join, it's a great feeling and there is scope to play at national and international level,'' said Nadia, a student.

The girls of Kargil are extremely happy with withholding such an event. Girls from the region are being allowed to show their talent and be a part of teams to represent their country at the National and International levels.