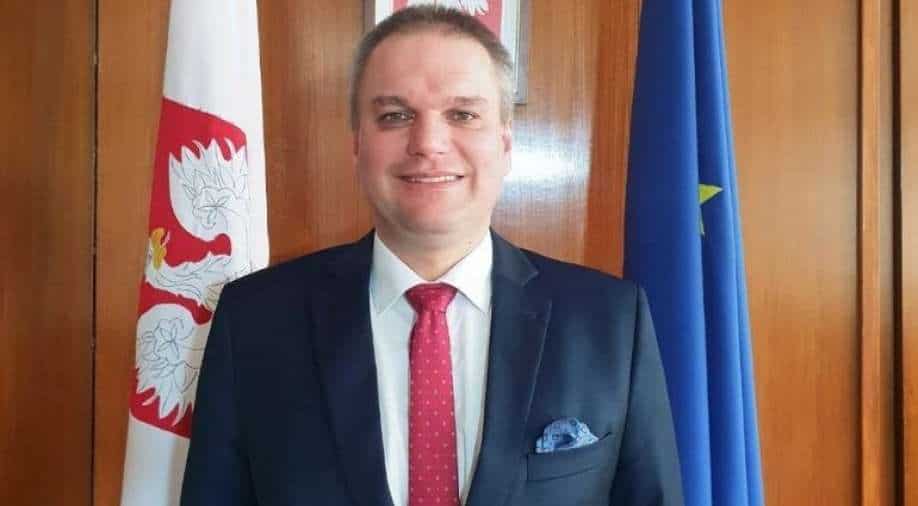 In an exclusive interview to WION, Polish envoy Adam Burakowski hoped the Air Transport bubble between the two countries can be started soon

Poland has lauded India's vaccine diplomacy, with its envoy in Delhi, Adam Burakowski saying, "We are happy that your country is becoming more active and vaccine diplomacy is very important". Speaking to our Principal Diplomatic Correspondent Sidhant Sibal, Burakowski hoped the Air Transport bubble between the 2 countries can be started soon, pointing out, "We have applied for an air bubble with India and we are waiting for the reply. " LOT Polish Airlines had started a direct flight between Warsaw and Delhi in September 2019 but this was halted due to Covid-19 pandemic in 2020.

He spoke on several subjects, like Economic and Political ties with India and China and his country's role in Afghanistan. On Afghanistan, the Polish envoy to Delhi, who is also accredited to Kabul said, "We want a peaceful and stable Afghanistan. This is a fantastic country. My dream is someday Polish tourists can visit this country". It is interesting to know, Poland prints Afghanistan's currency of 10 and 20 denominations.

Sidhant Sibal: How has been the cooperation between India and Poland has been when it comes to dealing with COVID crisis?
Adam Burakowski : Covid has impacted the whole world in a very negative away. Poland is cooperating with India from the beginning. From the first lockdown in March, we cooperated in rescue flights. Few rescue flights were operated for Polish citizens and Vande Bharat flights for Indian Citizens stranded in Poland. It was a very good example of common cooperation against threats all over the world. Nowadays, the situation in the whole of Europe is much worse than India unfortunately. Many lockdowns in many countries. In Poland, we have a national quarantine. Many things are closed, restaurants are closed, hotels are closed, and also if you go to Polish cities, you don't see many people on the streets. This is very hard. We have started a program on vaccination. We are following the EU program and we are using vaccines accepted by the EU. One of them is AstraZeneca which is also produced in India and maybe some cooperation in the future. No cooperation as of now and we have already vaccinated one million out of 38 million Polish population and we hope it will go smoothly. And we hope lockdown is over and we can restore our normal activities and also Polish India ties. India is becoming more and more important in Polish thinking about the world.

Sidhant Sibal: How has been the connectivity between the 2 countries amid the pandemic. Has there been any transport bubble, which has opened?
Adam Burakowski: We inaugurated direct flight from Delhi to Warsaw by LOT Polish Airlines in Sept 2019. So after half a year of this very successful flight connection,  the occupancy was over 90%, we had to cancel it because of Covid. While there were some rescue flights by LOT Polish Airlines. Nowadays, we don't operate with passengers, it operates with cargo to Delhi and Mumbai. We have applied for an air bubble with India and we are waiting for the reply. We hope that when India decides to be more open, Poland and Warsaw will be on their list because we are ready to work on strengthening our ties and our cooperation. LOT flight is ready to fly to India at any moment and it will be solved very soon. There are around 4000 Indian students in Poland and leading Polish universities give program in the English language. We are still giving students visas so that students can go and start studies and we want to increase this. This will be more easy when we reopen the direct flight.

Sidhant Sibal: How do you see India's vaccine diplomacy and any cooperation on the vaccine front. Any comments on the ongoing tiff between EU and AstraZeneca.
Adam Burakowski: India, I think made a very good move to become one of the largest producers of the vaccine in the world. We observed India provided vaccine to south Asia, neighboring countries, and also some countries which are some distant. This program went quickly and rapidly and helps many countries and millions of people. We see that the Govt of India has some plan to be more active in this in the world. We are very hopeful that India will play a bigger role. India shares so many values with Poland and Europe. We are happy that your country is becoming more active and vaccine diplomacy is a very important, very helpful tool for the world. Concerning EU AstraZeneca, I hope it will be solved very soon. And maybe, more quantity of AstraZeneca will be produced in India, but this is a question better to ask AstraZeneca company. We all hope vaccines in the world go smoothly and quickly.

Sidhant Sibal: On ties with India, how do you see the overall relationship when it comes to Europe. Also on China, do you see ties. So overall, India and China, and Poland's ties with both countries. This even as China has been aggressive with the countries in the region.

Adam Burakowski: China is important to partner with Poland and we have many ties with China, especially economic, political. We have totally different political system, we have a democratic system. But we cooperate on economics, there is also a train route, that takes cargo. We see the European Union prepared an agreement on investment with China. We were not so hurrying to have this agreement before some consultations especially our transatlantic partners, US and new admin of Joe Biden. We strongly advocate transatlantic ties. Concerning India, we hope India will be closer and closer to European Union as a whole. We have big expectations from the India EU summit that will take place in Portugal in May this year. Also, in Poland and central Europe group Visegrád, we want to show India can also have good and better relations with us, especially economy, students you mentioned, connectivity. We have some hopes of increasing cooperation with India in Cybersecurity. Ongoing India EU dialogue on cyber issues.

Sidhant Sibal: Poland has played an important role in Afghanistan if you can elaborate on that?
Adam Burakowski: Poland always supported Freedom and stability in Afghanistan. Polish soldiers have been part of the missions, we have contributed not only militarily but also development projects. Especially in Ghazni and northern Areas. We strongly support freedom and stability in Afghanistan. And we not only support verbally but also in action. We have a Polish military contingent that is part of a resolute support mission. Poland has just printed the banknotes for Afghanistan. The banknote of 10 and 20 Afghani. This also example of very good cooperation with Afghanistan. We want a peaceful and stable Afghanistan. This is a fantastic country. My dream is someday Polish tourists can visit this country and enjoy the atmosphere, the food, views, the mountains. I hope the Afghan elite can set up some long-lasting solution for peace and stability.