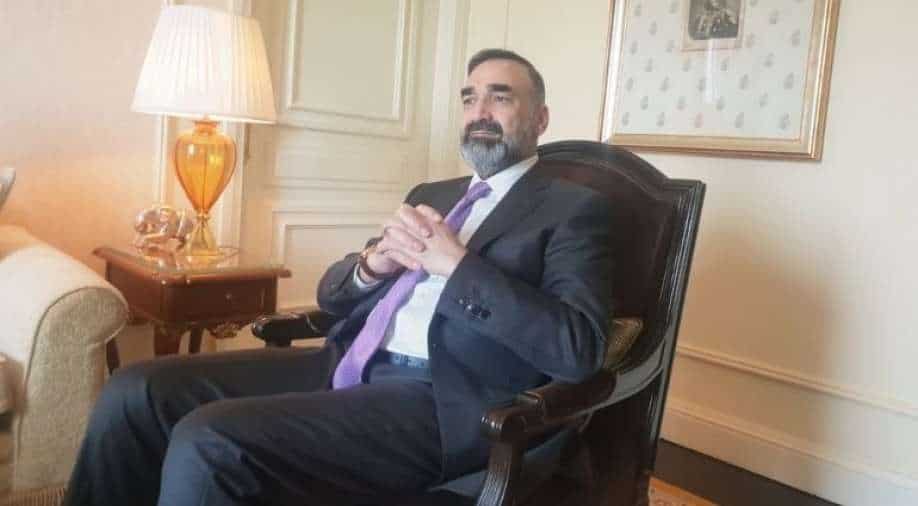 Noor who is in Delhi and met with India's External Affairs Minister and Foreign Secretary in 2016 took up arms himself to save the Indian consulate in Mazar E Sharif.

Atta Mohammad Noor, an influential Afghan politician, once a key leader of the Northern Alliance that fought against the Taliban in the 1990s has said India should engage with the Taliban.

Speaking to WION's diplomatic correspondent Sidhant Sibal, Atta Noor said, "India has the right and engages the Taliban and in line with their national interests".

Noor who is in Delhi and met with India's External Affairs Minister and Foreign Secretary in 2016 took up arms himself to save the Indian consulate in Mazar E Sharif. On ties with India, Mohammad Noor explained, "India has got a good relationship with its old and traditional friends, who stood against the imposed war in the past.". He is the 3rd top Afghan leader to visit India in the last one month as peace talks gain pace. In the current situation in his country, Noor said, "If we have active diplomacy ....there is justice in the talks, we won’t get back but other wise we have to prepare ourselves for a second resistance". He also spoke on Pakistan, Hekmatyar's Islamabad visit.

Atta Noor: Thanks, in the name of God. I am very happy to be in India on an official invitation from our friends, our brotherly and friendly country. It is the old friend of the Afghan government and the Afghan people. Our people have affection for this country. I am happy and have met with the leadership. We discussed issues of mutual interest. Regarding peace, the talks are going on. people of Afghanistan want peace, this is one of the desires of the Afghan people. We have been suffering for the last 42 years. Our country has been burning. The talks are going on, but with no results. Regarding the talks and the regional issues, India as an influential and big country with a big economy and capacity, it should engage in the peace talks in Afghanistan. It should be amongst the countries facilitating the talks and also it should be a member of the regional countries in consensus. India has got a good relationship with the Afghan government and we appreciate it. India has got a good relationship with its old and traditional friends, who stood against the imposed war in the past.

WION: You met with the Indian leadership, External Affairs Minister S Jaishankar, and FS Shringla. What were the talks like?

Atta Noor: I have had a good meeting with FS Shingla, a seasoned diplomat. I have also had insightful meetings with MEA Jaishankar, who is a scholar too. I talked about the common concerns we have, the common enemies we have. We also discussed the peace talks. We have common values, trade, and cultural values with India. I am satisfied with the messages I have received. India has reiterated to stand by the Republic and by gains we have made and by the Afghan people.

WION: Do you think India should engage with the Taliban?

Atta Noor: India as one of the biggest regional and Asian countries has its own interests and I appreciate and respect their plans. But regarding the peace process in Afghanistan, they have to have a pro-active policy and engage the ongoing talks. When China has the right to meet the Taliban and meet their interests, but when the Russians and Iran and other countries, so India has the right and engage the Taliban and in line with their national interests and helping the Afghanistan people.

WION: Do you think the repetition of what happened in the 1990s, the Taliban coming?

Atta Noor: we are hopeful that the 90s will not repeat again. I hope that the US will not repeat what the Russians did. I hope the peace process will yield results and our strategic friends care for Afghanistan. If there is no active diplomacy and the gains of the 19 years are not preserved and if the former resistance leaders and prominent leaders are not supported, the situation will get worst. If we have active diplomacy and the results of the peace deal will be in line with what our people want, and there is justice in the talks, we won’t get back but otherwise, we have to prepare ourselves for a second resistance

WION: How do you see Pakistan's role?

Atta Noor: There is no doubt that Pakistan is our neighbour and shares a border of 2500km. We share culture. There have to be good relations between the two countries. Pakistan is the mother of the Taliban, supporters of the Taliban, and sending them to Afghanistan,. no one can ignore this. If Pakistan believes that peace in Afghanistan is peace in the region, we will work towards building good relations. If Pakistan thinks they can support insurgents in northern Waziristan and they send it to Kashmir as well, it will be repetition that will burn both countries. Pakistan says that they support the peace process led by Afghanistan, I hope they really mean it. Time will reveal it.

WION: While you are in Delhi, Hekmatyar is in Islamabad. How do you see him, and his ties with you?

Atta Noor: Respecting Hekmatyar who is a jihadi leader and leader of Hezbi Islami, but over the last 20 years who he has been in a hideout, I don’t see any changes in his character. when he surrendered to the Afghanistan government, we thought his attitude would have been charged, but nothing changed. We are living in the 21st century, we have a new generation that is equipped with new equipment and are connected with the world, but his mindset has frozen 50 years ago. He still has discrimination, he has an ego. maybe it is a coincidence that I am here and he is there, I have also been to Pakistan for a peace conference, his invitation to Pakistan is against the former resistance. we have seen that the Afghan government wants peace, it had loyal jirga, made the negotiation team, it even gave privileges to the Taliban, the government to make peace released 5000 Taliban prisoners. But Hekmatyar’s first word was that the Afghan government doesn’t want peace. In short, Hekmatyar is waiting for the opportunity to spread his venom to the former resistance group and to the regional friends.