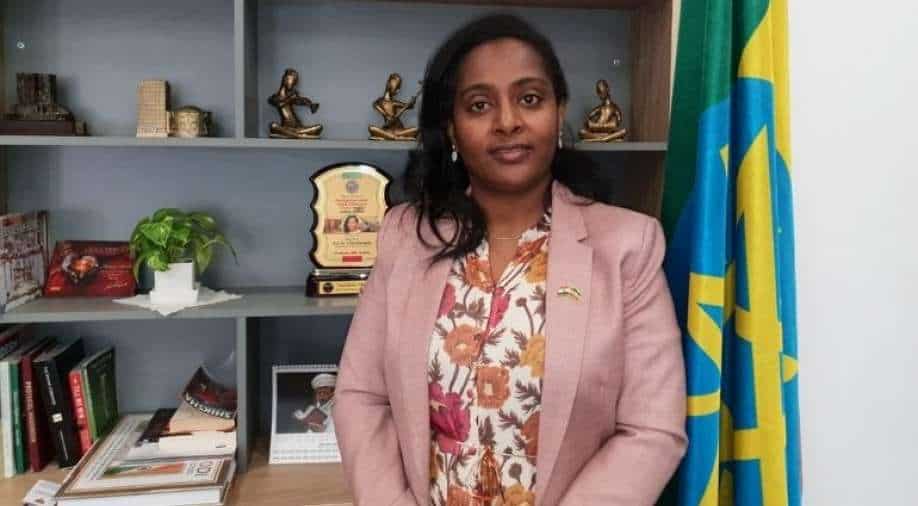 The Tigray crisis has been making global headlines after worsening the situation in that part of Ethiopia. The development comes after clashes broken between the Ethiopian government forces and the local Tigray People’s Liberation Front (TPLF). Tigray is a region in the northern part of Ethiopia and shares borders with Eritrea, Sudan

Speaking to our diplomatic correspondent Sidhant Sibal, Ethiopian envoy Tizita Mulugeta to India, said, "Ethiopian side took an opportunity to explain to Indian side" regarding the existing political situation in the country especially the conflict in Tigray and humanitarian assistance being delivered to the Tigrayan people at this moment".

The Tigray crisis has been making global headlines after worsening the situation in that part of Ethiopia. The development comes after clashes broken between the Ethiopian government forces and the local Tigray People’s Liberation Front (TPLF). Tigray is a region in the northern part of Ethiopia and shares borders with Eritrea, Sudan.

The envoy also spoke on India's outreach amid the Covid pandemic. She said, "Always whenever there have been any kinds of difficulties, India has been there to support Africa and particularly Ethiopia." Adding, "We know India is the hub of pharma" and it has the "capacity to support many countries and we have seen them supporting neighbouring and African countries."

WION: How do you see India-Ethiopia ties?

Tizita Mulugeta: First of all, when we see the relationship between these two countries, we have to see that the relationship has been there for a long period of time and is historical. It started in the first century BC, and Indians went to Ethiopia to sell different kinds of items including silk, spices and they used to get ivory and gold from Ethiopia. So, this relationship is historic, and the trade relationship has grown very well, and we started our diplomatic ties in 1948, just immediately after India got its independence. So, from then onwards we have got a very profound kind of relationship, especially one that focuses on capacity building. When we have seen a capacity building with a lot of Indian professors and teachers going to Ethiopia to teach in Ethiopian high schools and universities. This means Indians were playing a very good role in producing generation in Ethiopia, which is the base for development and growth also. This relationship has grown into trade and investment relation, especially for last 15 years number of Indian investors have been growing in Ethiopia. Trade relations, I can say we have good trade ties, so generally social, political, diplomatic, we have profound relation. We are working to develop this relationship into strategic relationship.

Tizita Mulugeta: Basically, we have been waiting for this visit for a long time, it means something for us. During the visit, bilateral issues were discussed especially the Ethiopian side took an opportunity to explain to the Indian side, the Indian government regarding the existing political situation in the country especially the conflict in Tigray, and humanitarian assistance being delivered to the Tigrayan people at this moment. Ethiopian government explained to its Indian counterpart, how much access is open to providing humanitarian assistance to the needy over there and how much the Ethiopian govt is ready to respect the human rights, of the Tigrayan people, and also the refugees, especially Eritrean refugees in the Tigrayan region. Beyond that, it was an opportunity to explain regarding border conflict between Ethiopia and Sudan. Ethiopian government explained that the position is to amicably solve this problem based on negotiation. We managed to sign different agreements, especially, visa wavier agreements for diplomats and also agreements on education between two different institutions. It will help us to go further to the next level and develop a relationship into a strategic relationship.

WION: How do you see India's role in Africa?

Tizita Mulugeta: When we talk about Indian Involvement in Africa, it is not recent history. It has been like a long period of time. We could find a lot of Indian Diaspora in any part of the Africa that has been there for a long period of time, in addition to that, Indians have been playing a very big role in the national movement of independence. So, I can say, relationship between India and Africa is very profound, and India and Africa have worked a lot for the development of capacity in African countries, and the trade and investment relationship has also grown very well. So, they share a lot of commonalities especially in UN reforms and the International agenda. So far, Indians playing a very good role in entering Africa and making their presence better than the previous ones. India and Africa share lot of development trajectories. There is a lot, Africa can learn and a lot Africa can get from India especially in terms of adaptable technologies, because we really share many things, for instance, both Indian and African societies based on agriculture. We can learn how India is trying to get to a high level in terms of the economy and many levels. We can learn from Indian democracy, governance. I can say so far role of India is really, it means a lot. We can refer to three India-Africa summits, that has been there for last 15 years. All these summits have seen different development issues as agenda. Current PM Modi has given priority to presence of India in Africa, taking this into consideration, I can say India could be one of the great partners of Africa and for African development.

WION: How has been covid cooperation between India and Ethiopia?

Tizita Mulugeta: Always whenever there has been any kind of difficulties India has been there, to support Africa and particularly Ethiopia. So, when covid pandemic came last year, India was one of the first country that sent different kinds of medical equipment to Ethiopia. We are really grateful to that. Our PM has spoken to PM Modi, they have talked a lot on how to cooperate in terms of covid and other related issues. We know India is the hub of pharma and it has capacity to support many countries and we have seen they are supporting neighboring and African countries. We are studying on how to get support from India and my government will consider on how to benefit from this relation.